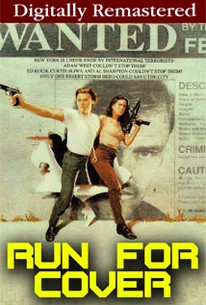 In this action thriller, a Gulf War veteran is America's only hope for salvation when a group of ex-Soviets threatens to take over. Written and directed by Richard W. Haines, Run for Cover stars Tom Dunne as a hero in a race against time to save the country from the clutches of evil. The film also features appearances by political figures Ed Koch and Rev. Al Sharpton.

Ed Koch
as The Mayor

Critic Reviews for Run for Cover

Mr. Cagney's performance, as usual, is cocky and colorful without a great deal of substance or strenuous sincerity.

Ray's sensitive handling of actors and his exact compositional sense are as much in evidence as ever.

Cagney tried to revive gis career with this offbeat, moody but not great Western directed by Nicholas Ray, who imabues the film with signature themes and visuals.

Cagney was about 56 when he made this interesting western. He was a bit long in the tooth, but his vitality showed through his wrinkles and the result was a pleasing picture.

Ray endows it with his usual themes of generational conflict and societal injustice, and does a powerful job getting these themes across.

There are no featured reviews for Run for Cover at this time.