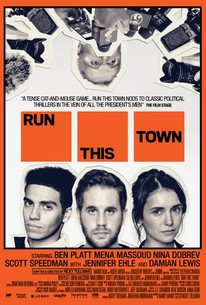 Genevieve Kang
as The Squirrel

Catherine McNally
as Woman Behind Desk

News & Interviews for Run This Town

View All Run This Town News

Critic Reviews for Run This Town

I never for a second forgot that I watching an actor under piles of makeup.

I did buy the freshness and the youth in this world of industries dying.

This is well-trod territory in 2020, explored richly in any number of TV shows and films, and the choice to center Run This Town on Millennial malaise is an odd one.

An involving but stretched-thin journo procedural.

Smart, ambitious and impressive, "Run This Town" is the best kind of feature directing debut, a film that entertains and makes you look forward to what will come next.

The movie never quite reconciles its assorted perspectives into a coherent point of view.

The film feels scattered, and its lack of a central rooting protagonist does nothing to help the situation.

Jam packed and lightening-paced it hop scotches around, pausing only long enough to linger on a grotesque caricature of Rob "Show me some respect, will ya?" Ford.

It's almost astonishing just how misbegotten and uninvolving Run This Town is virtually from the get-go...

A laboratory of ideas, but with truly cinematic workmanship. [Full review in Spanish]

This shrewdly constructed movie leaves the monster in the background and highlights the eager and opportunistic help.

[A]mbition only goes so far, and Run This Town simply lacks the screenwriting smarts to keep up with itself.

There are no featured reviews for Run This Town at this time.