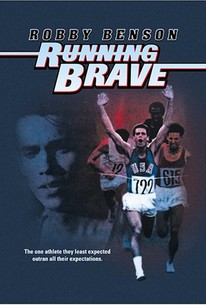 In the case of this dramatized story about a Native American who thrilled the world when he won the 10,000 meter run in the 1964 Tokyo Olympics, the subject is far nobler than the script, the dialogue, and the acting. Billy Mills (Robby Benson), a member of the Sioux tribe from South Dakota, ran track at the University of Kansas under a hard-nosed coach and competed successfully for a spot in the Tokyo Olympics. His extraordinary feat of beating out a field of world-famous, championship runners stands in stark contrast to the clichéd characters that are portrayed here as an important part of his personal world. Issues of discrimination and alienation are sidestepped as well, leaving a watered-down version of a life that must have been a considerable challenge when the running shoes were off. ~ Eleanor Mannikka, Rovi

It's well made but it's not electrifying. One thing about Rocky is that it wasn't reluctant to pull out all the stops. Running Brave has been made with a certain gentle restraint that may work against it.

No one will mistake Running Brave for a great work of art, but it's an overlooked film that young people should see.

An inspirational story of what you can achieve if you are determined enough and work hard. The usual rags to riches and then conquer the Olympics is nothing new but it does tackle stronger issues based on racial and class prejudice.