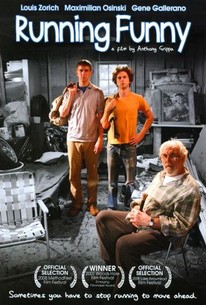 Two recent college graduates ponder their career prospects while living in an apartment garage owned by a blind war veteran in this independent, coming of age drama. Michael and Eddie may have finished school, but their journey into the real world has only just begun. Flat broke and with no real job prospects, the pair decides to take up residence in an apartment garage owned by crusty but kindly war veteran Stan. Once settled, Michael and Eddie begin perfecting their resumes and attempting to land their first real jobs. Over the course of the next thirty days, Michael dwells wistfully on the past while discovering that he has more in common with Stan than he does with his best friend. Meanwhile, Eddie dreams of the high-paying job that will one day permit him to permanently sever ties with his parents.

There are no critic reviews yet for Running Funny. Keep checking Rotten Tomatoes for updates!

There are no featured reviews for Running Funny at this time.