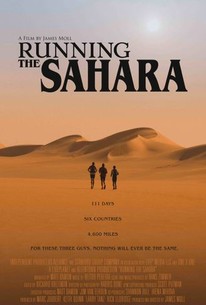 Running the Sahara is a feature documentary narrated and executive produced by Academy Award winner Matt Damon and directed by Academy Award winner James Moll. This powerful and inspirational film chronicles an attempt by three ultra-marathoners to run across the entire length of Africa's Sahara Desert, tackling not only the elements, but also unimaginable physical and emotional obstacles. Their goal is to run across six African countries, anticipating two marathons per day, for eighty days ... without a day off. Charlie Engle from the United States, Kevin Lin from Taiwan, and Ray Zahab from Canada, have run together in marathons before. But this time is different. This isn't a race. It's a grueling test of will and a chance to accomplish something that no known person has ever achieved. The films score was produced by Academy Award winner Hans Zimmer, composed by Heitor Pereira, with songs from U2, Pearl Jam and original songs performed by Wyclef Jean and the African Children's Choir.

Critic Reviews for Running the Sahara

There are no critic reviews yet for Running the Sahara. Keep checking Rotten Tomatoes for updates!

Audience Reviews for Running the Sahara

I always enjoy reading travelogues of exotic places and books about people doing things I would never, ever think of doing. So, as you could imagine, I hit the jackpot with the documentary "Running the Sahara." Personally, I think running a marathon is crazy enough but running two marathons a day on a 7500 kilometer journey from Senegal to Egypt through the Sahara Desert takes a special kind of certifiable. That's where extreme runners Charlie Engle, 42, of North Carolina, Ray Zahab, 37, of Canada, and Kevin Lin, 30, of Taiwan come in. Of course, it helps that they have the three most supportive and understanding significant others in recorded history. While "Running the Sahara" focuses on the runners and their personalities, I was left wondering at the end about the differences between running on different surfaces, especially sand. At the same time, that leaves little room for interaction with native peoples or sightseeing. Even then, the documentary still manages to capture some memorable images of the region. It should be noted that this was before the Arab Spring(getting into Libya is a whole struggle in and of itself), so things might be different now, but what never changes is the hard lives of the peoples living in the desert which the filmmakers seek to help by building wells.