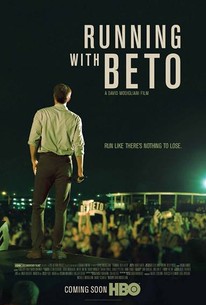 Critics Consensus: Candid and compelling, Running with Beto is an illuminating exploration of an up-and-coming politician and the changing political landscape around him.

Critics Consensus: Candid and compelling, Running with Beto is an illuminating exploration of an up-and-coming politician and the changing political landscape around him.

Critic Consensus: Candid and compelling, Running with Beto is an illuminating exploration of an up-and-coming politician and the changing political landscape around him.

This behind-the-scenes documentary follows Beto O'Rourke's rise from virtual unknown to national political sensation through his bold attempt to unseat Ted Cruz in the US Senate. Embedded with Beto for the final twelve months of his campaign, the film follows his journey in real time through intimate access to O'Rourke, his family, and a team of political newcomers who champion a new way of getting to know a candidate -- one Texas county at a time. The film reveals the challenges and triumphs of an unconventional campaign as Beto navigates an onslaught of negative advertising, inevitable strain on his family, and the pressure of delivering for legions of supporters. This film is creatively and financially independent from Beto O'Rourke and his campaign.

News & Interviews for Running with Beto

View All Running with Beto News

Critic Reviews for Running with Beto

Naturally, O'Rourke is the star at the center of this movie, and he comes across well enough. Maybe a little too well: Even a handful of less flattering moments can't stop Running with Beto from feeling, at times, like a feature-length campaign promo.

Oddly,... "Running With Beto" is most compelling when O'Rourke isn't in it.

The most interesting voice is that of O'Rourke's 11-year-old son, Ulysses. Astute and intelligent, his point of view is the freshest and one of the most honest and it's from his perspective that the audience understands the true sacrifice of the race.

What is probably most illuminating, mind you, is how the film (made by David Modigliani) delineates the partisanship that exists in the United States right now.

"Running With Beto" works best, in other words, when viewed as a marathon, not a sprint.

Running With Beto captures how much enthusiasm has been generated by those frustrated by both President Trump and Republican decision-making at various levels of government.

In fact, it's in the crafting of the film's antagonist, Ted Cruz, that artistic intent can be felt.

The director of the film is otherwise so unable to generate any heat from his room-temperature candidate that he hands over scenes to fans and volunteers, some of whom are much more colorful.

His enthusiasm is infectious, even as his family gets wary of his relentless campaigning.

Running with Beto is a solid look at the inner-workings of a senate campaign...

...we cannot help but become emotionally invested, even if we know how this all will end.

Michael Ward
Should I See It

There are no featured reviews for Running with Beto at this time.