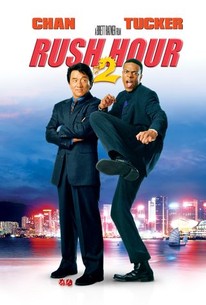 Critics Consensus: Rush Hour 2 doesn't feel as fresh or funny as the first, and the stunts lack some of the intricacy normally seen in Chan's films.

Critics Consensus: Rush Hour 2 doesn't feel as fresh or funny as the first, and the stunts lack some of the intricacy normally seen in Chan's films.

Critic Consensus: Rush Hour 2 doesn't feel as fresh or funny as the first, and the stunts lack some of the intricacy normally seen in Chan's films.

A surprise box-office smash spawns this inevitably action-packed buddy comedy follow-up that reunites director Brett Ratner with stars Jackie Chan and Chris Tucker. Chan is Chief Inspector Lee of the Royal Hong Kong Police, who travels back to China with his American colleague, Los Angeles detective James Carter (Tucker). The men intend to take some vacation time but are quickly pulled into the case of two murdered U.S. customs agents, who were investigating an illegal counterfeiting scam involving Ricky Tan (John Lone), one of the most powerful Triad gangsters in Asia and an old enemy of Lee's. Lee and Carter are soon embroiled in a dangerous mystery that also involves a sexy secret-service agent (Roselyn Sanchez), a billionaire hotel owner (Alan King), a dangerous femme fatale (Zhang Ziyi) and a finale set in a lavish Las Vegas casino. ~ Karl Williams, Rovi

Meiling Melacon
as Girl in Car

Maggie Q
as Girl in Car

Cindy Lu
as Hostess No.2

Less compelling than the first, but fun for fans.

Follows so closely in the footsteps of its hugely successful predecessor that an actual review is practically unnecessary.

The whole film plays like an outtake, and that I do mean as a compliment.

While the rest of it isn't really any good, it's certainly no chore to watch.

The film seems content to rely on the formula that could (small sigh) extend for a few more sequels.

A sequel that is every bit as satisfying as its predecessor.

Though fun, lighthearted, and action-packed, this sequel appears largely interchangeable with its predecessor.

The action scenes are still good, but the comedy itself is very slight.

This is an excellent example of a comedic-action film. The story consistently pushes and it never lets up. The fact that it's under 90 minutes also helps. The humor has its ups and downs, but more than not, especially with the amount of comedic dialogue provided, they are able to generate enough laughs.

The stylized object oriented action and stunt work is good clean fun. The choreography is on the money while leaving the want for more.

Jackie Chan's "out of country" personality works well in a film of this nature. Chris Tucker, while constantly spitting out line after line, manages to stay below the level of annoyance. Roselyn Sanchez and Zhang Ziyi compliment the male leads without fail. Watching Zhang Ziyi in the role she's given is a turn on.

Rush Hour 2 entertains and that's all that matters. "Some apple?"

Jackie Chan and Chris Tucker have great chemistry, using their differences to their advantage. A good movie if your looking for just comedy.

Ahh, the classic sequel-syndrome. "Rush Hour 2" was not as good as the first. It doesn't improve in the action, story, or comedy but it tries too hard to be more grand. The production values is upped a bit but the direction, editing, and camera shots are still too elementary. Still a fun time though.

The best out of the three hands down. This film has a really well thought out story line, and great comedy from Tucker and Chan. It packs a punch.