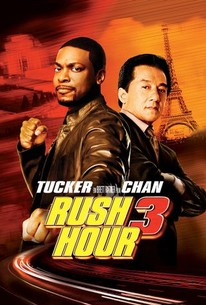 Critics Consensus: Rush Hour 3 is a tired rehash of the earlier films, and a change of scenery can't hide a lack of new ideas.

Critics Consensus: Rush Hour 3 is a tired rehash of the earlier films, and a change of scenery can't hide a lack of new ideas.

Critic Consensus: Rush Hour 3 is a tired rehash of the earlier films, and a change of scenery can't hide a lack of new ideas.

In this third installment of the popular action comedy franchise, LAPD Detective James Carter (Chris Tucker) and Chief Inspector Lee (Jackie Chan) book a flight for Europe and prepare to clean up the streets of Paris after discovering that Chinese triads have extended their criminal influence to the City of Lights. Chinese Ambassador Han (Tzi Ma) is in Los Angeles and about to reveal the details of a clandestine triad conspiracy to the World Criminal Court when an assassin takes aim and pulls the trigger. Though Carter has been demoted to directing traffic at the time of the shooting, Lee is acting as a bodyguard to Han when the bullets begin to fly. Lee quickly gives chase, but hesitates when he realizes that the gunman is Kenji (Hiroyuki Sanada), his old friend from the orphanage. When triads steal an envelope containing vital information regarding the conspiracy from Soo Yung's (Zhang Jingchu) Chinatown kung fu studio, Carter and Chief Inspector Lee race to reach Genevieve (Noémie Lenoir), an underground entertainer who could prove the key to bagging the bad guys. During the course of their investigation, however, triads clash with the French police, threatening to turn the romance capitol of Europe into an explosive hotbed of crime and violence. ~ Jason Buchanan, Rovi

No matter how fast Chris Tucker shoots his mouth or Jackie Chan flashes his fists, they can't recapture the charm of the original Rush Hour in this third installment.

The third installment is so cartoonishly stupid it makes the original look like a classic.

There's a bizarre lack of anything to care about beyond the dynamic duo at the center of the film. Chan and Tucker can only carry an audience so far.

This movie makes a fine replacement for the previous two installments.

Rush Hour 3 is an awfully spare title for such a big-money enterprise, but an appropriate subtitle like Auto Pilot or Once More For The Cash would have given the game away.

By the third time around, though, we know that these two get along and it's just not as funny anymore.

I hate to use the phrase, "they're only in it for the money," but if any sequel ever exemplified that ethos, it's this one. Ultimately, Rush Hour 3 is a one trick pony whose day has long since passed.

Although much of Rush Hour 3 is in Paris, it's no French pastry. It's more week-old Happy Meal.

I have never thought I would ever profess to be a Jackie Chan fan. Yet, at the ripe old age of 31 having just seen Rush Hour 3, it appears that I am.

The film is formulaic and the plot is barely connected together. But it moves along quickly and there's the occasional smile.

There's not much reason for this film. There's nothing new in it and it's preposterous.

Third installation of the unlikely comedy duo. Lee and Carter find themselves in Paris hunting down the triads to save a girl.

Run of the mill, identikit police action comedy, worst than the first two because its just the same and no different, although the first was alright. Tucker is reasonably funny but Chan should retire, the ending is impressive at the Eiffel Tower but becomes way too stupid very quickly, they jump off the top for christs sake, its just so dumb and predictable.

was it inevitable that this franchise would falter so bad? probably. i loved the first two, but while this one had some good action and very funny moments, it also had some terrible action, stale jokes, and the chemistry between the characters faltered a lot mostly due to tucker i think. the terrible end killed this film for me, but to be honest, i'd still watch a 4th one in an instant.