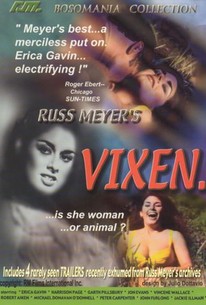 In this Russ Meyer production, Vixen (Erica Gavin) is unable to control her insatiable appetite for sex. Her husband Tom (Garth Pillsbury) is unable to satisfy her, so in the beginning scene she is seen coupling with a Mountie. She moves on to various other partners, including a married couple on vacation at a dude ranch, her brother, a black airplane hijacker and another woman. Once and a while, Vixen makes time for her husband's amorous requests, but there probably isn't enough film in the world to chronicle her sex-crazed conquests. In the '60's, Meyer was quick to denounce the recent four-category rating system of films that branded his films with an "X" after the release of this feature. Still, the rating system of G, PG, R, and X would remain until 1997, and would find Meyer still denouncing the system of ratings as forced censorship and the choking of artistic freedom.

Stands as a prime example of Meyer's infantile and sometimes disarmingly protean perversity.

Russ Meyer's film is another of his technically polished sexplicit dramas, this time free of physical violence and brutality, and hyped with some awkwardly developed draft-dodging and patriotism angles.

The film that showed Meyer to have the most dynamic editing style in American cinema, and took him from nudie king to national monument via the most outrageous exploitation of bosom buddydom ever.

Vixen is the best film to date in that uniquely American genre, the skin-flick... In a field filled with cheap, dreary productions, Meyer is the best craftsman and the only artist.

Equally popular with both male and female viewers, Vixen is a take-charge woman who gets what she wants.

The dialogue of this film alone, without any visual accompaniment, would presage a much more explicit film, not to mention its entertainment in and of itself.

The genius of Russ Meyer is that he directs sleazy subject matter with the bright, cheery energy of a harmless TV sitcom. The viewer's moral filters are fooled -- it's a guilty pleasure, minus the guilt! One of Meyer's better vehicles, "Vixen!" squeezes plenty of bouncy fun into just 70 minutes. Of course, the plot is secondary to the sex scenes (which are quite tame by today's standards), but the story is delightfully offbeat: Bush pilot Tom lives with his insatiable wife Vixen (Erica Gavin) in the remote forests of British Columbia. Vixen's motorcycling brother Judd also hangs around the place with his black, draft-dodging friend Niles. All sorts of quirky dynamics simmer between these four. Vixen boasts that she'll sleep with anyone except "spades and cripples," and repeatedly infuriates Niles with racist epithets. Niles is prone to break into diatribes about being asked to fight the white man's war, while otherwise being treated like a second-class citizen. Naive, easy-going Tom has no idea about his wife's frequent infidelities. And Judd and Vixen nurse incestuous desires for each other. Oh my. The action heats up even more when Tom is hired to fly a young, attractive couple to Toronto, and lets them temporarily stay at his lodge. Dave neglects his wife Janet but is tempted by Vixen's overt flirtation, and sex-starved Janet is eager for revenge. Will these curvy women keep their tops buttoned? If you've ever seen a Russ Meyer movie, you know the answer. The final act takes an unexpected turn when Tom brings home a second client whose unusual agenda makes Niles reconsider his anti-America mindset. Intriguing, how Meyer manages to fit discussion of communist Cuba into a lowbrow skin flick. Gavin lives up to her character's name with a lovely, refreshingly natural body (she looks somewhat like Sarah Silverman, if Silverman were actually as sexy as her male fans insist). She's not the world's best actress -- when she's in an aroused frenzy, her tremors and clenched jaw seem more murderous than excited -- but her seduction dance while fondling a river trout can not be missed.