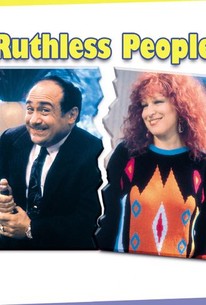 Critics Consensus: It's sometimes crude and tasteless, but Ruthless People wrings acid-soaked laughs out of its dark premise and gleefully misanthropic characters.

Critics Consensus: It's sometimes crude and tasteless, but Ruthless People wrings acid-soaked laughs out of its dark premise and gleefully misanthropic characters.

Critic Consensus: It's sometimes crude and tasteless, but Ruthless People wrings acid-soaked laughs out of its dark premise and gleefully misanthropic characters.

The last film to be co-directed by Jim Abrahams, David Zucker, and Jerry Zucker, Ruthless People stars Bette Midler (capitalizing on her comeback performance in Down and Out in Beverly Hills) as Barbara, a spoiled rich woman who is kidnapped by the kindly Ken and Sandy Kessler (Judge Reinhold and Helen Slater). Barbara's forceful husband Sam (Danny DeVito) has ripped off the Kesslers and they decide to hold Barbara for ransom. Sam, who hates his wife, refuses to pay. Eventually Barbara befriends the Kesslers and together they figure out how to exact revenge upon the obnoxious Sam. Bill Pullman makes his film debut here as a very dim, would-be criminal.

Jeannine Bisignano
as Hooker in Car

Christopher Keene
as Cop at Jail

Janet Rotblatt
as Secretary to Chief of Police

Frank Sivero
as The Mugger

Twyla Littleton
as Model
View All

Moana, Star Trek Beyond, and More on Netflix and Amazon Prime This Week
75 Best Summer Blockbusters of All Time
Danny DeVito’s 10 Best Movies

One tires of the movie's relentlessly shrill tone and its excessively raunchy jokes.

Directors Jim Abrahams, David Zucker and Jerry Zucker are the same guys who who gave us "Airplane!" six years ago and "Ruthless People" is a lot funnier and meaner.

There are both belly laughs and chuckles along the way, and comedy that shows the skill of writer, directors and actors, all put together for optimum results.

The characters here aren't just bad; most of them are truly vile -- human slime. And the film makers chew them up (especially two nefarious bonbons played by Danny DeVito and Bette Midler) with the toothsome glee of jolly cannibals.

...the narrative offers the kinds of twists and turns that wouldn't disgrace a Coen brothers thriller...

This is Zucker, Zucker and Abraham's best movie since Airplane! although there is enough crude humor and strong profanity for a half-dozen R ratings.

A great deal of bizarre circumstances occur in this very effective farce, and for any mind that is easily won over by the insistence of shocking humor, it continues to hold a bewildering power to inspire shock, awe and some unforgettable chuckles.

DeVito and Midler are superb in their roles as the greedy philanderer and his screaming, overbearing other half.

Occasionally crude and tasteless, Ruthless People is a comedy with a vitriolic twist. It`s a comedy about people who love to hate, with actors who make it worth seeing.

Without all the madness of Airplane, The Naked Gun or Top Secret, the trio: Jim Abrahams and David and Jerry Zucker made a terrific intelligent comedy, with the misunderstandings between the characters, the complex plot, a funny cast (with the best of Danny DeVito) make Ruthless People one of the greatest comedy film of the 80's and of the Touchstone Pictures. Fresh.

Ruthless People is a fun, entertaining comedy film that has good gags going for it. I enjoyed the film, but it did lack in some areas, and it could have been a bit better. However this is a good little comedy that was directed by the guys who made Airplane! However this isn't their best work. Bette Midler is very good here, and she makes the film worth seeing. I, on the other hand, never did enjoy Devitto's work, but I like him here, and he is pretty funny in his part. The film manages to be good enough to be a worthwhile comedy to watch, and if you're looking for a pleasant time waster, then give this one a shot. Although not the greatest comedy, there are enough effective elements to make this one a memorable flick to watch. I even if at times the film's material lacks, the cast do affine job to elevate this film into very humorous moments that works throughout. Everything you'd expect from the directors is present and there's enough zany humor to make this one worth seeing despite its flaws. I liked the film, and it's smartly constructed and it manages to rely more on its great cast, which are just funny on-screen to really make it standout above its flaws. Enjoy this crazy ride. Middler is great here, and she is one of the film's biggest strengths with a well written script that has more good things going for it than bad, directors, Jim Abrahams, David and Jerry Zucker craft a fine little comedy that is sure to please comedy lovers.

While not as entirely crazy and hilarious as their Naked Gun films, this comedy by the Zucker, Abrahams, Zucker team still shows some trademarks of the same kind of humor: wonderfully ditsy main characters, fights with kitchen utensils and plenty of mix-ups. While Frank Drebin's adventures are more like a 90 minute collection of gags, the plot here is actually quite smart and make use of all of its characters and the chaos that entails. Bette Midler is particularly funny and outshine her two kidnappers easily. The clever solution to the entire confusion is also quite clever. Soundtrack and look of the film make it a perfect example of the 80s comedy that may not have aged well but still have that particular charm and the jokes still work years later.

This is THE ultimate film of misunderstandings. Every plan in this film goes wrong, and in an absolutely spectacular fashion. The plot for this one is dark and hilarious, making Danny DeVito one of the most loathsome (but funny) characters in film history. What makes this so surprising is that it's a Touchstone film, which means it was funded by Disney. What's unsurprising is why it's funny. It was made by the "Airplane" team, Jim Abraham, David Zucker, and Jerry Zucker, which means it's going to be decently funny no matter what. This is absolutely awesome instead of just decently funny. It's very crude at certain points, but I was too busy laughing to care. One of the best con comedies of the 80s.