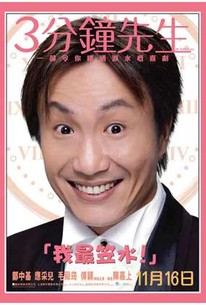 Cheng plays a successful fashion designer who suddenly finds himself with a child he didn't know he had, who had been brought up so far by the sister of his old girlfriend (played by Cherrie Ying). Naturally he wants to keep partying with the ladies at first, but he comes to learn what all Dads learn, that actually it is really rewarding to spend lots of time with your son. Veteran actors Hui Siu-Hung (as a dumpling chef), Richard Ng (as Cheng's Dad), and Gordon Liu (as a be-wigged minor triad) make rewarding guest appearances, but Theresa Mo, as Cheng's assistant, steals the show.

There are no critic reviews yet for Saam fun chung sin saan (Mr. 3 Minutes). Keep checking Rotten Tomatoes for updates!

There are no featured reviews for Saam fun chung sin saan (Mr. 3 Minutes) at this time.