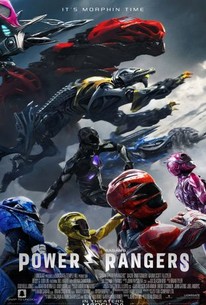 Critics Consensus: Power Rangers has neither the campy fun of its TV predecessor nor the blockbuster action of its cinematic superhero competitors, and sadly never quite manages to shift into turbo for some good old-fashioned morphin time.

Critics Consensus: Power Rangers has neither the campy fun of its TV predecessor nor the blockbuster action of its cinematic superhero competitors, and sadly never quite manages to shift into turbo for some good old-fashioned morphin time.

Critic Consensus: Power Rangers has neither the campy fun of its TV predecessor nor the blockbuster action of its cinematic superhero competitors, and sadly never quite manages to shift into turbo for some good old-fashioned morphin time.

A group of high-school kids, who are infused with unique superpowers, harness their abilities in order to save the world.

Ranking 26 Giant Robots From Film and TV
How Family-Friendly Is Despicable Me 3?
On DVD This Week: Power Rangers, T2: Trainspotting, and More

It doesn't take itself too seriously and it lets itself have a good time and be full of joy. It's about friendship and family and teens being teens.

The loneliness and anxiety experienced by each of the characters perfectly captures how hard it can be to grow up. The fact that the teenagers all come from different backgrounds and are of different ethnicities is the cherry on top of the cake.

Power Rangers plays something like The Breakfast Club crossed with Transformers (to which this film makes a couple of direct nods).

Power Rangers' saviour is its own knowingness, its own touch of self-reflective cynicism; though the key here is that it never launches itself into the full meta-attack we've come to expect in a post-Deadpool era.

It might be inelegant, but it's nonetheless a solid equation to appease the nostalgic a new generation of fans.

As cash grabs go, this one is delightfully unconcerned with coolness, neither shying away from its chintzy roots nor ironically embracing them.

The cast is good and the ride is a fun one.

While not quite recommendable, it turns out to be surprisingly watchable.

Power Rangers will not set your world on fire, but given its target audience and intent it is a strong example of a film that does everything right and very little wrong. It is fun, enjoyable, and tidy.

Is name recognition so powerful that we'll embrace anything that reminds us of our childhood?

It was so boring and I didn't expect that.

When it comes to reboots, it could go both ways. Either a film transcends the material or it should've just stayed in the past. While I'm not going to be raving that this iteration of the Power Rangers is exceedingly better than the old shows and movies, I'll definitely be giving it a much larger recommendation than I was expecting to. Some viewers may complain about movies just because they copy storylines from other classic films or that their outcome is incredibly predictable, but when a film cares about its story and characters, that doesn't really matter to me. Personally, I found myself predicting most of the story beats here, but I was invested in the events that were happening. For these reasons and more, here is why I highly recommend checking out Power Rangers. This film begins with slight backstory as to why the events will be taking place throughout the film, but immediately transitions into a super-powered version of The Breakfast Club. This may be a stretch, but if you've seen The Breakfast Club, there will easily be a few elements throughout this film that you'll probably find yourself enjoying. Although there are surprising layers as to why these teenagers end up together, the basic plot is that they come across a rock formation that gives them incredible abilities. They must discover their purpose, learn to bond together as friends, and defeat a looming threat in Rita Repulsa. The performances/chemistry these actors/actresses share is honestly wonderful and what made me like the film as much as I did. That being said, where the film falls apart is the fact that they have to spring into action t take down the villain so quickly. I've heard critics complaining about how over-the-top Elizabeth Banks is, making her feel out of place in this otherwise serious film, but I can't say I agree. There are enough fun aspects to this movie that does find a safe place to include this incarnation of Rita Repulsa. The issue I have is that she feels thrown into the film just for a climax to occur. I cared far more about the rangers themselves, rather than needing a big action sequence at the end. On top of that, the second the realize their powers, they are immediately sprung into action to pilot giant machines and take her down. The climax is quite fun, but the build-up was a failure in my opinion. Aside from a sloppy climax, there really wasn't much else to complain about here, because the movie knew exactly what it was. Going into this movie, I was afraid of this film trying to simultaneously devote itself to the old and new crowds, forgetting about the story at hand. To my surprise, that's exactly what they do, but the story still remained at the forefront. You could tell where the nostalgic nods were and where they were trying to bring these characters to a new generation, but that didn't feel jarring at all. When this film wants to be silly, it works for the most part, when it wants to be serious, the cast really shines, and when it just wants you to sit back, turn your brain off and a have some fun, you'll know exactly when that is. This film had a great balance of everything it wanted to accomplish, even if it's predictable from start to finish. In the end, I'm not going to deny myself and complain about things that bothered others, because I honestly had a blast watching Power Rangers. Yes, it's cliched to the nines, predictable from start to finish, and even a little cheesy when it comes to its dialogue, but this is a fun film for all ages to enjoy. There will be many viewers that could probably care less about this film, but I still recommended checking it out and seeing for yourself. With fun montages, a great cast, and a story that somehow makes itself relevant, Power Rangers is a far from perfect movie that gets a glowing recommendation for me. Sometimes you just want to have fun watching a movie and that's all that Power Rangers is. Clearly mixing elements of The Breakfast Club and Chronicle, there is much more to this film than you might expect. You may hate it, so take this with a grain of salt, but Power Rangers is a blast to watch.

Dean Israelite's morphs a campy TV series into a full fledged action adventure with the Power Rangers. Riding in at nearly 2 hours, the character buildup, at least for most of the characters, does its job. The first couple of acts of this picture takes its time morphing into shape, and this is good; the better parts of the film. The finale is where all the fun happens; however it speeds up too quickly for its own good. The CG and action is a mixed bag, but more than tolerable. The finale showcases more than enough to go around. RJ Cyler, Dacre Montgomery, and Naomi Scott are the heart of this picture. Ludi Lin, Becky G, and Elizabeth Banks, while integral characters, suffer from a sufficient lack of development. While the Power Rangers isn't perfect, it more than satiates the hunger for an action adventure.