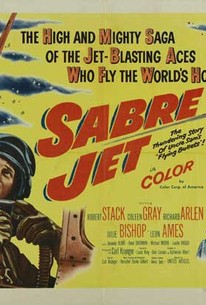 Filmed in Cinecolor, Sabre Jet concentrates as much on a group of jet pilots' wives as on the pilots themselves. As their husbands fly combat missions over Korea, the wives remain behind in Tokyo, waiting, hoping and dreading. The most prominent of the female contingent is Jane Carter (Coleen Gray), the journalist wife of flyboy Gil Manton (Robert Stack). At first resenting her husband's life-threatening work, Jane comes to realize the importance of dedication and sacrifice during wartime. Julie Bishop delivers a strong performance as the wife of downed pilot (Richard Arlen). Sabre Jet is something of a precursor to the 1961 film X-15. ~ Hal Erickson, Rovi

There are no critic reviews yet for Sabre Jet. Keep checking Rotten Tomatoes for updates!

Strictly routine in every way.

This movie made in 1953 about one of the neatest jets in the Air force the saber jet. Its an awesome aircraft and an awesome movie showing the life of a jet pilot in the Korean war. Home based out of Japan a squadron and there families are high lighted in this movie, After a mission some return some don't. If your a fan of classic aircraft this movie shows actual footage of mass take offs, landings and fly byes. And excellent war movie and aircraft lovers. 4 stars