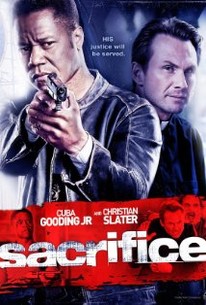 A haunted undercover cop teams with an enigmatic priest to solve the mystery of a missing statue that was stolen from a church by violent criminals. John Hebron (Cuba Gooding, Jr.) was a cop who always got his man. But when his wife and daughter became the victims of a terrible crime, something deep inside of John shattered. Desperate to forgive himself for failing to save his family in their hour of need, John turns to Father Porter (Christian Slater) for salvation. Later, after John learns that a statue from Father Porter's church has been stolen by some local thugs, repentant criminal Mike (Devon Bostick) reveals a secret that will plunge the two men into a treacherous world of crime and punishment. ~ Jason Buchanan, Rovi

Here's hoping that these guys can graduate to something bigger and/or better soon, but until then, this is an acceptable time-waster.

With such a good cast I was expecting more, story line is a good one but the editing ,music , and some of the 'support' cast acting makes this look and feel like a 'B' movie and should go straight to DVD (if it already hasn't !.) I can only assume that the majority of the budget went on the fees of Cuba Gooding Jr and Christian Slater and so they had to make do with varied ability rest of cast and crew and after finishing filming, took it to a local school or collage to find someone to edit it together! Sorry but a few good people have put in a lot of effort into this film but they have been let down very badly by so many others the I am sure they will not be putting this film on their CV.if you are really bored and want to while away an hour and a half or so, then go ahead and check it out but do not say I didn't warn you and I hope you find something a lot better to waste your time and possibly money on! Come on Cuba and Christian, you can and have done a lot better than this, don't sell out and let your loyal fans down, the next time you get an offer like this, unless you have editorial control , turn it down !!!! 3 stars. 12-12-13

A real waste of time. Christian Slater in a very unmotivated and lazy performance and Gooding Jr, wasting just as much time in a role thats been done many times before but only better. Kim Coates gives a good performance with what material he has. Its just a weak and boring production.