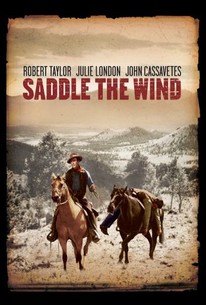 Rod Serling's first original screenplay for the Big Screen was the psychological western Saddle the Wind. In one of his best performances, Robert Taylor plays Steve Sinclair, a world-weary gunslinger. Hoping to become a rancher, Sinclair is given a plot of land by patriarchal Dr. Deneen (Donald Crisp), on the proviso that Steve tries to curb the violent tendencies of his younger brother Tony (John Cassavetes). Unfortunately, Tony is not so easily controlled; he not only seethes with sibling rivalry, but also takes near-orgasmic delight in his gunslinging skills. Determined to prove to Steve and to his saloon-girl paramour Joan Blake (Julie London) that his shooting prowess somehow makes him a superior being, Tony brings tragedy to all concerned. Elmer Bernstein's overemphatic musical score is ideally suited to the larger-than-life histrionics of Saddle the Wind.

Critic Reviews for Saddle the Wind

This above average psychological Western is unfortunately static and humorless.

There are no featured reviews for Saddle the Wind at this time.