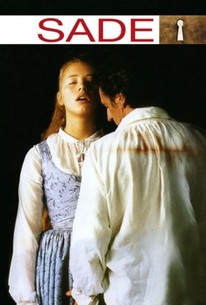 Daniel Auteuil stars as the infamous Marquis de Sade, who at the beginning of Sade, is serving a sentence in Paris' grim Saint Lazarde prison. The year is 1794, and Sade is being persecuted for his steadfast atheism, which runs counter to the beliefs of Robespierre, France's terrifying revolutionary leader. The Marquis is granted something of a reprieve when he is transferred -- courtesy of his mistress Sensible (Marianne Denicourt) -- to Picpus, a former convent that now serves as the equivalent of a luxury prison. Although Picpus is not without its own guillotine and mass grave, Sade is more concerned with the blossoming Emilie (Isild Le Besco). Meanwhile, Sensible, who has a son who calls Sade "Papa," is forced to share the bed of her own protector, Fournier (Gregoire Colin), a moody lout who hates Sade and works for none other than Robespierre.

Sade is Quills without the hyperbole and melodrama.

It's a rosy coming-of-age romp that refuses to see the horror even in the severed heads from the guillotine.

This Sade is hardly a perverse, dangerous libertine and agitator -- which would have made for better drama. He's just a sad aristocrat in tattered finery, and the film seems as deflated as he does.

If you're looking for a smart, nuanced look at de Sade and what might have happened at Picpus, Sade is your film.

A fiercely clever and subtle film, capturing the precarious balance between the extravagant confidence of the exiled aristocracy and the cruel earnestness of the victorious revolutionaries.

This time out, [Sade] is an unsettlingly familiar figure -- in turns loyal and deceitful, responsible and reckless, idealistically selfless and coldly self-interested.

The Marquis de Sade couldn't have been as dull a person as this film makes him out to be.

The reason to see "Sade" lay with the chemistry and complex relationship between the marquis (Auteil) and Emilie (Le Besco).

There are no featured reviews for Sade at this time.