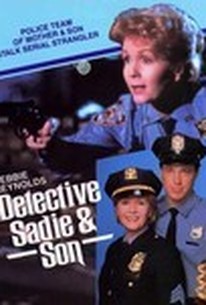 Sadie (Debbie Reynolds) is a salty, streetwise New York cop, forced into early retirement. Her son (Brian McNamara) is a rookie police officer. Carl Kleinschmidt's script contrives to have Sadie and Son become partners: she performs a heroic deed while in "civvies," and is restored to the force. The rest of the film concerns itself with the younger cop's paranoia over living up to his mom's reputation, with time left over for a couple of romantic subplots. Filmed in Toronto and first telecast October 21, 1987, Sadie and Son represented Debbie Reynolds' first foray into the TV-movie field.

Critic Reviews for Sadie and Son

There are no critic reviews yet for Sadie and Son. Keep checking Rotten Tomatoes for updates!

There are no featured reviews for Sadie and Son at this time.