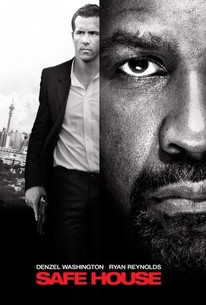 Critics Consensus: Safe House stars Washington and Reynolds are let down by a thin script and choppily edited action sequences.

Critics Consensus: Safe House stars Washington and Reynolds are let down by a thin script and choppily edited action sequences.

Critic Consensus: Safe House stars Washington and Reynolds are let down by a thin script and choppily edited action sequences.

Denzel Washington and Ryan Reynolds star in the action-thriller Safe House. Washington plays the most dangerous renegade from the CIA, who comes back onto the grid after a decade on the run. When the South African safe house he's remanded to is attacked by mercenaries, a rookie operative (Reynolds) escapes with him. Now, the unlikely allies must stay alive long enough to uncover who wants them dead. -- (C) Official Site

Lynita Crofford
as Reporter at Stadium

Jerry Mofokeng
as Man at Mint

Though it's not a premise we haven't seen played out before on the silver screen, Safe House is a movie that sucks you in, guts you, and spits you out at the end.

[Safe House] is utterly predictable stuff, in case you haven't already figured that out by now.

The film's super-saturated look and quick cutting are mere substitutes for any real sense of intrigue.

Car chases, brutal fight scenes and much ancillary action crowd the story, but there's little to detain the brain as far as script or characterisation go.

There are so many muscly, gun-toting guys having bloody brawls, it looks like some online research has been carried out to see what niche audience might appreciate this film most.

There's much to be said for nuts-and-bolts action thrillers when they are competently assembled. But this one is falling apart at the fastenings.

Why do scripters even try to hide the identity of the villain until the end? Given the obviousness in these films, they might as well include a character named Professor Plum, usually found brandishing a lead pipe in the conservatory, and be done with it.

As for the action and choreographed violence, perhaps the number two reason for purchasing a ticket this weekend, again Safe House delivers adequately.

The South African location, Denzel Washington's duplicitous dialogue, and the intense car chases help to coax viewers into forgetting about the humdrum plot.

Nothing you haven't seen before, "Safe House" is lightning-fast, and full of shootouts, brutal fistfights, and chase scenes.

The end product resembles a Catherine wheel: a loud, bright firework that goes nowhere, spinning in circles until long after everyone stopped caring.

Probably so, it was fun and does what it does pretty well. Don't go in looking for a transcendent experience of film cause that's not what it is supposed to do.

Decent if typical Hollywood action thriller with by now obligatory rah-rah underpinnings. By the numbers. Picked out the surprise twist ending bad guy in under 2 minutes. The cast simply needs to show up and be charming, and this much they manage. There's no real teeth here though.

A decent action/thriller with a few twists. You know you are always going to get a good performance out of Washington. Maybe it could have done with a bit more action, it did seem to slow down quite a bit in parts. Overall though a good entertaining film if not anything new or groundbreaking.

Bourne is black... I mean back. No wait, this is the wrong review. All jokes aside, it delivers high octane action enough to please action junkies alike. And with a premise that's somewhat interesting, "Safe House" is (wait for it...) a SAFE BET. LOL, GET IT? Sorry, now really all jokes aside, you're not going to spot anything new. You're gonna get the shaky cam and the breathless editing; you're gonna get the gritty fisticuff action; you're gonna get the conspiracies and whatnot. So don't come here thinking that this is gonna be something exceeding the likes of the Bourne series. However, it emulates the Bourne series excellently with a surprisingly dynamic relationship between Tobin Frost (Denzel Washington) and Matt Weston (Ryan Reynolds). So it's an above-average, enjoyable action thriller but a forgettable one.