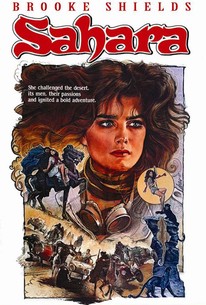 Although it is based on an intriguing premise -- Dale (Brooke Shields), disguised as a man, takes the place of her late father in a 1927 car race through the Sahara -- this film perversely falls flatter than a blow-out, and just as quickly. After starting the race and because of tribal warfare, Dale winds up a prisoner of the thug Rasoul (John Rhys-Davies) but is appropriately rescued by a dashing sheik (Lambert Wilson). Then after she is back in the race, she is captured and thrown into a leopard's cage by another desert villain. The Indy 500, this is not.

The many adventures... serve to hide the lack of dramatic resources from this beautiful model named Brooke Shields. [Full Review in Spanish]

An interesting movie from the past. Brooke Shields stars.

Loved this movie when I was littler. A fun movie, for the girls. ;)