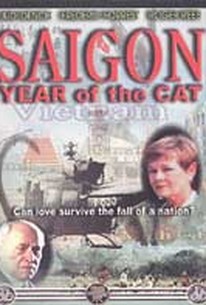 Saigon: Year of the Cat is a low-budget drama about the fall of Saigon. The film was made for the BBC in 1983. It was one of many television projects that director Stephen Frears (High Fidelity) worked on in the early part of his career. Playwright David Hare (Plenty) wrote the script. Judi Dench plays Barbara Dean, a depressed loan officer working for a British bank in Saigon in 1974. Barbara politely wards off the advances of her Scottish co-worker, Donald (Roger Rees), who does not share her respect for the Vietnamese people. She also avoids getting involved with Frank (Wallace Shawn), an American embassy employee with whom she plays bridge. When she meets Bob (Frederic Forrest), however, she's immediately attracted to him. She soon learns that while Bob poses as a cultural attaché, he actually works for the CIA. When Bob belatedly recognizes her attraction, he opens up to her, and they become lovers. Bob hears from a reliable intelligence source that the North Vietnamese are stepping up their aggression and plan to take Saigon soon. He tries to convince his boss, Jack Ockham (Josef Sommer), and the U.S. ambassador (E.G. Marshall) to prepare for the fall of the city by evacuating the South Vietnamese citizens who have worked most closely with the U.S. government. The ambassador does not want to appear to be abandoning President Thieu's regime. He refuses to credit Bob's report. Meanwhile, as the crisis looms, Barbara is growing despondent because Bob is not spending time with her, and because there's little she can do to help her South Vietnamese friends get out of the country. ~ Josh Ralske, Rovi

E.G. Marshall
as The Ambassador

Andrew Winner
as Officer
View All

Critic Reviews for Saigon: Year of the Cat

There are no critic reviews yet for Saigon: Year of the Cat. Keep checking Rotten Tomatoes for updates!

There are no featured reviews for Saigon: Year of the Cat at this time.

Saigon: Year of the Cat Quotes