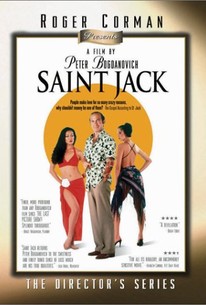 In the crime melodrama, Saint Jack by director Peter Bogdanovich, Ben Gazzara plays an American pimp, operating in Singapore. Seeking independence from the local mob, Gazzara is browbeaten--and sometimes just beaten--by the criminal powers-that-be. Resignedly, Gazzara goes to work for a fellow American mobster (played by director Bogdanovich, who is appropriately slimy) and ordered to photograph a crime-fighting senator (George Lazenby) in a compromising position. Gazzara finally develops a conscience, a shade too late. Filmed on location, Saint Jack was produced by the director's former mentor Roger Corman.

If Saint Jack is not another complete embarrassment for Bogdanovich, it nonetheless reveals his deficiencies as a film maker.

Hard to imagine how anyone could make less of such a promising subject.

One wishes it were more outrageous and less knowing.

...a brilliant character study of a reprehensible man who is also a decent human being...

...an episodic drama that ultimately benefits quite substantially from its use of real-life Singaporean locations and the superb work of its performers...

Saint Jack is one of Peter Bogdanovich's most conscientious films. [Full Review in Spanish]

It's good to have [Bogdanovich] once again feeding his habit -- and ours -- for well-made movies with engaging characters and a fine feeling for time and place.

It's too hollow and sentimental to rise to any great critical heights.

The story is told in too meandering a style and the many well-acted characterizations never mesh together.

Gazarra is amazing; Muller as DP; a story about capitalism; friendships are business here, maybe real in passing; Jack stays true to himself