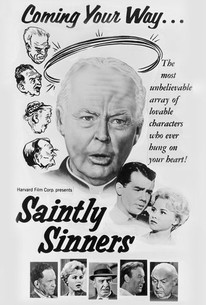 In this comedy, two small-time con men steal an honest ex-convict's car and use it to rob a bank. They then hide the loot in the car's spare tire. Unfortunately for the ex-con, his car ends up repossessed and eventually sold to a parish priest who immediately drives off for a much-needed fishing trip. The priest is then stopped by a cop who recognizes the vehicle from the robbery. The priest is blamed for the crime and jailed; he is then released and the ex-con is arrested in his place. Because the police claim that the priest has been harboring criminals in his parish, his monsignor transfers him. The good parishioners are so distraught that the con men feel remorse and confess to their crime. Peace is restored, and happiness ensues.

Robert B. Williams
as Hank

Marla Craig
as Maybelle
View All

There are no critic reviews yet for Saintly Sinners. Keep checking Rotten Tomatoes for updates!

There are no featured reviews for Saintly Sinners at this time.