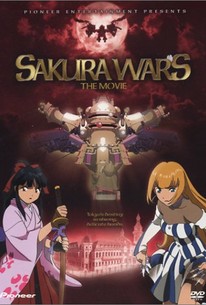 The feature adaptation of this long-running continuity has been pumped up with redesigned characters, computer-generated mecha, jazzy special effects, and flashy tracking shots. Unfortunately, all this visual razzle-dazzle doesn't add up to much. Director Mitsurou Hongo doesn't bother to introduce the characters or the set-up, and Ojhi Hiroi's story has a jingoistic edge. Brent Furlong, the head of the American Douglas-Stewart company, plots to replace the Operetta Troupe Flower Division with his unmanned mecha Japhkiels. His real objective is the conquest of Japan, but he underestimates the young women of the Flower Division, who defeat his mecha and demons. The flat, drawn characters and the 3-D CG mechanical devices look like they're taken from two different films, and the leaden pacing makes the film feel much longer than 85 minutes. The TV series is less flashy but more entertaining. (Unrated: suitable for ages 12 and older: considerable violence) --Charles Solomon

There are no critic reviews yet for Sakura Wars: The Movie. Keep checking Rotten Tomatoes for updates!

There are no featured audience reviews yet. Click the link below to see what others say about Sakura Wars: The Movie!