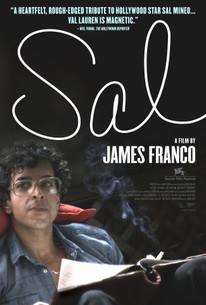 James Franco's Sal chronicles the final day in the life of actor Sal Mineo (Val Lauren), 1950s teen idol and an Academy Award (R) nominee for his roles in Rebel Without a Cause and Exodus. Almost two decades later, Mineo is no longer the marquee sensation he had once been - but he has become open about his homosexuality and is finding his way to becoming the actor and director he has always wanted to be. Featuring a magnetic performance by Lauren, Franco's intimate portrait finds the human details in a larger-than-life Hollywood story. (c) Tribeca

All we do is wait through uneventful hours with the protagonist until their foreordained death comes as a kind of finale and release.

Despite its modest proportions and chilling finale, Sal is foremost an affectionate tribute, conjuring ample warmth out of relatively little.

It functions under the delusion that subtext will magically appear if you linger on a character long enough, and the significance of most of its scenes is nothing if not inscrutable.

As always, Franco demonstrates a talent for and interest in composition, performance, and the naked human moment.

By focusing on one day in Sal Mineo's life, Sal feels more intimate than other biopics. The strong lead performance of Val Lauren as Sal Mineo provides a fascinating glimpse into the life...

While the subject is intriguing, Franco's amateurish rendering would make a marvelous film school project, one that's neither compelling nor as provocative as it thinks it is.

In other words, "Sal" is not all that different from most other films from directors fresh out of film school - ambitious, accomplished and with room to improve.

[S]cene after scene plays out as if Franco has watched one too many Gus Van Sant movies and figured that's how you make an Important Movie.

James Franco's lovingly crafted, if minimalistic, cinematic ode to Sal Mineo - the actor most famous for his Oscar-nominated role opposite James Dean in "Rebel Without a Cause" - succeeds due in large part to Val Lauren's thoughtful portrayal.

Franco's visual sense and skill with atmosphere are strongly evident here, but, unfortunately, not enough happens in the movie.

There are no featured audience reviews yet. Click the link below to see what others say about Sal!