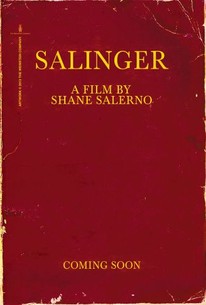 Critics Consensus: A so-so documentary about a fascinating personality, Salinger has moments of insight but is too often bogged down by reenactments and a lack of attention to the man's actual writings.

Critics Consensus: A so-so documentary about a fascinating personality, Salinger has moments of insight but is too often bogged down by reenactments and a lack of attention to the man's actual writings.

Critic Consensus: A so-so documentary about a fascinating personality, Salinger has moments of insight but is too often bogged down by reenactments and a lack of attention to the man's actual writings.

SALINGER features interviews with 150 subjects including Salinger's friends, colleagues and members of his inner circle who have never spoken on the record before as well as film footage, photographs and other material that has never been seen. Additionally, Philip Seymour Hoffman, Edward Norton, John Cusack, Danny DeVito, John Guare, Martin Sheen, David Milch, Robert Towne, Tom Wolfe, E.L. Doctorow, Gore Vidal and Pulitzer Prize winners A. Scott Berg and Elizabeth Frank talk about Salinger's influence on their lives, their work and the broader culture. The film is the first work to get beyond the Catcher in the Rye author's meticulously built up wall: his childhood, painstaking work methods, marriages, private world and the secrets he left behind after his death in 2010. (c) Weinstein

Critics Consensus: Riddick is Decent Action Fare
Parental Guidance: Salinger, Stories We Tell and From Up on Poppy Hill

Salinger triumphs, though, as an absorbing portrait of a singular man of mystery.

Too bad that Salinger offers no real insight into the elusive writer and is fueled almost entirely by trivial anecdotes.

The movie has a shallow, paparazzo literalism. It just wants to catch the legendarily reclusive Salinger getting into a Jeep.

What emerges is a portrait of an enigma.

Where Salinger succeeds is in the gripping section on World War II, and in the exquisite, often melancholy details in the stories told by the likes of Joyce Maynard.

A distractingly bombastic music design starts at a thundering pitch and has nowhere to go but further.

Despite its shortcomings, Salinger is not only interesting, but enlightening for those unfamiliar with this voice of a generation.

Beyond its disturbing aspersions cast on mental illness, the film tells a story that is inherently flawed by the absence of its own key player.

In total, Salinger might be an excellent documentary to watch if you want to know more about author J.D. Salinger, but the only way to truly know him may be to assume that everything he wrote was autobiography.

Many reviewers have made the obvious joke that Holden Caulfield would've hated Salinger because it's so phony-and he would have, and it is.

Salinger would scoff at it.

For those captivated by Salinger's writing, this intelligent and often invigorating film provides fine insight into his world.

For any fan of Holden Caulfield this interesting work explores the fetid earth from which he arose, along with some antidotal commentary from celebs who're fans just like you. You won't find out why he isolated from society, but if you are a fan then indeed you already know and can thusly enjoy watching celebs and others NOT KNOW, even after claiming to've loved Catcher.

It's not often that I see a documentary that isn't very good, but it's unheard of for a documentary to be so completely at odds with the message it tries to impart! A film that in turn idolizes Salinger in an almost creepy fashion and would have him rolling in his grave, "Salinger" is a phony mess, filled with manipulative music and swooping camera angles of what appears to be stock footage. Yet it is thorough in tracing his career, isn't afraid to question the man, and does end up imparting some interesting food for thought. Unfortunately, even if the documentary was not pretentious, and ultimately a commercial for books that Salinger may or may not actually have given permission to publish, it simply isn't well-made. Your average History Channel doc, or in other words, frustratingly disappointing.