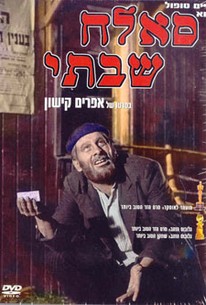 Israeli stage and film favorite Topol tops the cast of Sallah. Topol plays a Jewish refugee who moves his family to Israel shortly after the official establishment of that "promised land." Unlike his hard-working new neighbors, Topol is shiftless and lazy, forever finding the easiest, most painless means to support his family. Amazingly, Topol becomes a hero when, while wheeling and dealing, he uncovers misappropriations and corner-cutting in Israel's housing industry. This Menahem Golan production was originally released in Israel as Sallah Shabati. ~ Hal Erickson, Rovi

One of the most popular films in the history of Israeli cinema, this Oscar-nominated comedy catapulted Topol to international fame, resulting in his getting the title role of the musical Fiddler on the Roof.

Wonderfully rude and very funny. One of the finest films made in Israel.

There are no featured audience reviews yet. Click the link below to see what others say about Sallah Shabati!