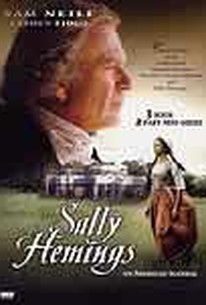 The story of the extraordinary, controversial thirty-eight-year relationship between Thomas Jefferson and his slave mistress, Sally Hemings. The teenage Sally begins her unexpected relationship with widower Thomas Jefferson in Paris where he is serving as the U.S. Ambassador to France. After escorting Jefferson's younger daughter on a trans-Atlantic journey to join him in Paris, Sally is soon exposed to a world quite unlike the one in which she has lived as an illiterate slave in Monticello. While Sally serves as a nanny of sorts, Jefferson provides her with an education, fine clothes and opportunities to experience cultural events. She and her brother, James, who works as Jefferson's chef and was also educated by him, delight in the fact that they are free in France-and are treated with respect. It is under these circumstances that Sally and Jefferson become acquainted with one another and begin an affair that will ultimately lead to scandal.

The mini-series is a distinct improvement on Jefferson in Paris.

There are no featured audience reviews yet. Click the link below to see what others say about Sally Hemings: An American Scandal!