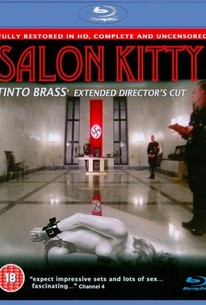 Tinto Brass scored his first major international success with this shocking but stylish tale of decadence in the Third Reich, inspired by a true story. Madame Kitty (Ingrid Thulin) is the proprietor of one of Berlin's most luxurious brothels, where many members of the Nazi high command are her regular customers. Kitty is approached by Helmut Wallenberg (Helmut Berger), an S.S. official who orders her to shut down her business and act as his partner as he founds a new bordello, which will exclusively cater to the elite of the Nazi Party and the German military. Unknown to Kitty, Wallenberg's brothel has been staffed entirely by women recruited by the S.S. for their loyalty to the Reich, and each room has been equipped with secret recording devices, which will allow Wallenberg and his staff to not only gather blackmail material against troublesome officers, but to discover who might be expressing disloyal thoughts about Hitler's regime when their guard is down. Margherita (Teresa Ann Savoy), a pretty young prostitute working for Kitty, is especially devoted to both her job and her country, but when she falls in love with Biondo (John Steiner), a German officer and frequent customer who has grown disillusioned with both the war and National Socialism, she discovers the true purpose of "Salon Kitty," and sets out to destroy the operation, with Kitty's help. Both a scandal and a success in Europe, Salon Kitty initially played the exploitation circuit in the United States in an edited version titled Madame Kitty, though the shorter version still earned an X rating.

Masquerading as an essay on decadence and Fascism, this predictably speculative slice of Nazi sex is aimed squarely at the box-office.

It's an exagerated sexploitation soaper, made of the stuff which is dumped in kitty litter.

All hail Tinto Brass doing Nazi Germany at its most debauched.

Proof that there's far more to Tinto Brass than his ability to persuade pretty girls to show their bottoms.

[A] failure, although with some very interesting moments.

"Put a little versa into your vice..." A perverse cabaret that's interesting because it's strange.