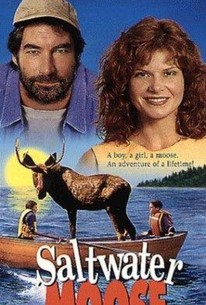 Made in Canada, this youthful family adventure follows a boat-builder's rambunctious but well-meaning daughter and her pal team up to attempt to bring companionship to a lonely bull moose marooned on a tiny island off the Nova Scotia Coast. Village local Jo Parnell (Katharine Isobel) is a spirited tomboy. Her lack of girly ways isn't surprising as she was raised by her widowed shipwright father (Timothy Dalton). Bobby Scoffield (Johnny Morina) is the new kid in town. Forced away from the city when his recently divorced mom (Lolita Davidovich) decided to take a summer break in her hometown, he considers himself stranded in the heart of hicksville. He and Jo become friends, and when she informs him of her plan, he helps her. First the two ingeniously trap a female moose. They then build a large raft for the voyage. Once afloat however, disaster comes in the form of a big squall and suddenly the children are fighting not only for their lives, but also that of their leggy passenger. Featuring an excellent cast, a lively story and beautiful on location photography, Salt Water Moose is an above-average family film.

Dan Warry-Smith
as Slug
View All

There are no critic reviews yet for Salt Water Moose. Keep checking Rotten Tomatoes for updates!

Mega wrong release date - this is a mid-90's film, and a not bad one at that.