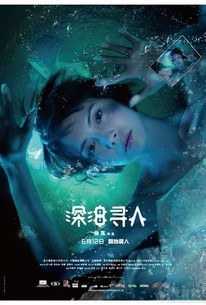 A whirlwind romance dies beneath the icy depths of the Pacific Ocean after a diver vanishes in the ancient ruins off Yonaguni Island, and his would-be fiancé embarks on a desperate quest to uncover his true fate. Years ago, acclaimed underwater photographer Dave Chen (Guo Xiao Dong) hid a sparking engagement ring in the 10,000 year old ruins at the westernmost tip of Japan. The ruins are Dave's greatest passion in life, and he always looked forward to the day he would return to the site with his true love, and propose to her in that awe-inspiring setting. Now Dave's dreams of finding the perfect mate have come true, and he's ready to propose to the beautiful Jing Gao (Lee Sinje). But as Dave, his sister Helen (Isabella Leong), and Jing Gao board a boat and set sail for the ruins, Helen implores her brother to take some time and weight his options. Insistent that he has found the woman he longs to share his life with, Dave follows Jing Gao into the ocean, never to be seen again. Soon thereafter, the decapitated corpse of a man is discovered, though lack of proper DNA evidence prevents the authorities from claiming that the body belonged to Dave. Devastated, Jing Gao drifts into a fantasy world populated by mysterious phantoms, where she discovers a strange piece of glass marked with the number "1016." As Jing Gao turns to her friend Simon for advice on finding out what really happened to Dave, Helen follows her instincts and travels to nearby Turtle Island in Taiwan in search of clues. What she finds there - a human head and a video camera featuring footage of the fateful dive - may be crucial to solving the mystery of her brother's disappearance. ~ Jason Buchanan, Rovi

There are no critic reviews yet for Sam hoi tsam yan (The Missing). Keep checking Rotten Tomatoes for updates!

There are no featured audience reviews yet. Click the link below to see what others say about Sam hoi tsam yan (The Missing)!