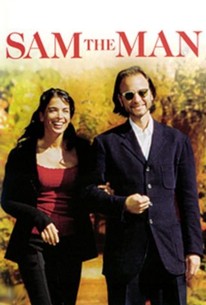 Before he broke out with the J.D. Salinger-esque Tadpole in 2002, producer-turned-director Gary Winick filmed this little-seen relationship drama. Fisher Stevens stars as the title character, a writer with one novel under his belt who can't seem to deliver the follow-up. Instead, he spends his time compulsively cheating on his photographer girlfriend, Cass (Annabella Sciorra); giving the runaround to his agent, Richard (Ron Rifkin); and trying to keep his landlord, Murray (Luis Guzman), at bay. Things take a turn for the worse when the husband of one of Sam's conquests (Maria Bello) confronts him, leaving Sam covered in hard-to-explain injuries. Soon, with the help of his barkeep brother, Lorenzo (Saverio Guerra), Sam is holding down a day job for the first time in years and reexamining every aspect of his life. After the success of Tadpole, the Independent Film Channel picked up Sam the Man for broadcast on cable television. The film's cast, filled with notable and lesser-known New York actors, includes George Plimpton, Griffin Dunne, and Rob Morrow.

Critic Reviews for Sam the Man

Even the costuming is wrong: In a display of truly terrible decision-making, someone put Stevens in a Stetson that's too big for him

Audience Reviews for Sam the Man

There are no featured audience reviews yet. Click the link below to see what others say about Sam the Man!