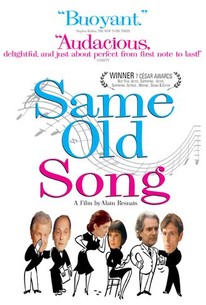 In this homage to acclaimed TV scripter Dennis Potter (1935-1994), famed 75-year-old French director Alain Resnais (Hiroshima, Mon Amour, Last Year at Marienbad) has actors lip-synch in a manner instantly recalling Potter's Pennies from Heaven (1978 TV serial, 1981 movie) and The Singing Detective (1986), regarded by some as the best original work ever created for television. Completing her history dissertation, Camille (Agnes Jaoui) is a Paris tour guide, and Simon (Andre Dussolier) is a regular on her tours because he's attracted to Camille -- although he claims to be researching his historical radio dramas. Camille's sister, business-executive Odile (Sabine Azema), is married to weak, furtive Claude (Pierre Arditi). In the past Odile was close to successful businessman Nicolas (Jean-Pierre Bacri), now married with kids and returning to Paris after an eight-year absence. Odile seeks an apartment from real estate agent Marc (Lambert Wilson). Camille and Marc begin an affair. Nicolas is also looking for an apartment, since he hopes to eventually have his family join him in Paris. These characters make easy transitions back and forth from the dialogue to 36 song fragments. The film's debt to Dennis Potter is acknowledged with a dedication in the opening credits.

Nelly Borgeaud
as Doctor No. 3

Jacques Mauclair
as Doctor No. 1

For all the expert interweaving of characters, plots, fantasies, and problems, the over-all impression is of a present tense that, in its febrile frivolity, is hardly a smudge on the heroic, turbulent, and bloody past.

A comedy about real estate and class differences, this was the biggest hit of Resnais' career in France, superbly capturing Paris in the 90s.

This is a puny benefit for a device that's arbitrary and precious and results in slowing down scenes and conversations for no reason but cuteness.

A tired tune, conducted by a maestro who appears to be tone-deaf.

By the end of the film you've become more than superficially acquainted with six recognizable and complicated individuals. How many movie musicals can make that claim?

Give Resnais credit for trying something different.

A multi-layered love story and meditation on the natural human condition, where the characters lip sync to famous French songs, current pop, and older music as well, used as inner-monologues, dialogue and thought.

What may have been intended as playful comes off as unbearably leaden and incongruous instead.

Over the course of its two hours, though, each of the main characters deepens and issues of deception, self-deception, trust, and control in their relationships take on surprising complexity.

In his middle seventies, Resnais is still going full-tilt.

There are no featured reviews for Same Old Song at this time.