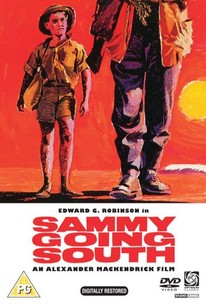 Released in the US as A Boy Ten Feet Tall, Sammy Going South is a rugged youngster's-eye-view adventure set in South Africa. 10-year-old orphan Sammy (Fergus McClelland), who resides in Port Said, tries to locate his only relative, who lives 5000 miles away across the desert in Durban. After the death of his first guide, an erstwhile peddler, Sammy is rescued by a wealthy tourist (Constance Cummings). Not anxious to return to Port Said, Sammy escapes his benefactress and links up with a crafty old hunter/diamond smuggler (Edward G. Robinson), whose life is saved by the boy. When the police search for Sammy, they arrest the old man, who has been a fugitive for years. When Sammy is finally united with his Aunt (Zena Walker), he learns that the old smuggler has willed him his fortune. Released in the US at 88 minutes, Sammy Going South was restored to its full 118 minutes for television. ~ Hal Erickson, Rovi

Zia Mohyeddin
as The Syrian

Mackendrick's films usually strike an attitude and have intuition on points of views. Relationships between his key characters are usually more clearly defined and worked on than in this.

This fresh, crackling and suspenseful African adventure story gives top billing to Veteran Edward G. Robinson, who bolsters the fun with his strongest performance in years.

The best live-action children's film I've ever seen, with a grasp of the quality of childhood experience so firm and precise that it is equally meaningful for adult audiences.

If the pace is oddly flaccid in places and the photography sometimes verges on travelogue territory, there is no denying the vitality of the performances, Robinson being particularly affecting.

Only Edward G. Robinson, sentimentalised into a role rather like Spencer Tracy's so long ago in Captains Courageous, provides an unclubbish brand of charm.

The disappointment is that Mackendrick, a film-maker who has been away for much too long, has been unable to make of them more than a prep school guide to darkest Africa.

A marvelous and inspiring adventure.

The concept of walking from one place to another is the simplest in the world - so why not do it?

There are no featured reviews for Sammy Going South (A Boy Ten Feet Tall) at this time.