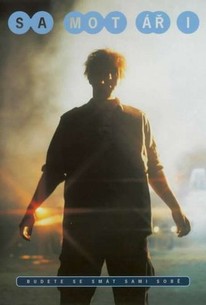 A huge hit in the Czech Republic, Samotari is an ensemble piece reminiscent of Cameron Crowe's Singles, Jasmin Dizdar's Beautiful People, and Paul Thomas Anderson's Magnolia. In the Czech capital of Prague, a group of friends and lovers searches for the meaning of their existence. Robert (Miki Kren) is a hustler who works for a travel agency and spends his spare time hitting on bartender Vesna (Labina Mitevska of Before the Rain), a recent Macedonian immigrant who is trying to locate her father. Robert has also tricked a young woman named Hanka (Jitka Schneiderova) into separating from her disc jockey boyfriend Peter (Sasa Rasilov); Hanka subsequently gets cozy with philosophizing stoner Jacob (Jiri Machacek) but is also being stalked rather clumsily by neurosurgeon Ondrej (Ivan Trojan). Ondrej happens to be Hanka's ex, and has abandoned his twin daughters and ambitious wife Lenka (Dana Sedlakova), who is a colleague of Robert's. Coincidentally, Lenka is in the process of arranging a tourist visit to the home of Hanka's parents.

Pavla Drtinová
as Girl in Bar

Miroslav Vaculík
as Surgeon #2
View All

With its studied nonchalance, Loners reaches neither the hilarity of an episode of Friends nor the ethnographic stickiness of The Real World on MTV.

[T]he film is stamped with a sharp visual wit and a funky style, with just the right amount of melancholy and magic to make the whole thing resonate.

There are no featured reviews for Samotari at this time.