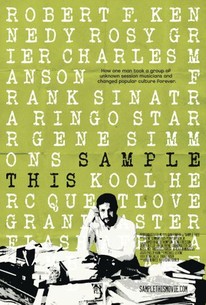 SAMPLE THIS is the true story of how unknown music producer Michael Viner brought together the greatest studio musicians of the 1970's to create an album that ultimately went nowhere... until the summer of 1973, when DJ Herc took the percussion breaks from that obscure album and extended them by playing them back to back. His beats became an anthem on the streets of the Bronx and ultimately the genre of Hip Hop, becoming one of the most sampled tracks in history and used by artists from Will Smith and Missy Elliot to Amy Winehouse and Jay-Z. (c) GogoDigital

News & Interviews for Sample This

View All Sample This News

Critic Reviews for Sample This

For a documentary filled with such joyous, danceable beats, there's still a note of sadness playing through Sample This.

This improbably fascinating documentary will be manna from heaven to pop culture devotees.

The movie provides a vivid sense of the period, as well as an intriguing backstage look at the making of improbable pop classics.

With their love of their craft and their respect for other talents, these bighearted musicians make for a warmly gratifying film to watch.

The film offers disappointingly little insight into the music itself.

Sample This contains a wealth of revelations about music and musicians with which most people are intimately familiar yet know little about.

Sample This is a jaw-dropping true story.

...it is hard to walk away too disappointed when the stories are this fascinating-and when the music is this triumphant.

Not nearly as moving, crowd-pleasing or powerful as Searching for Sugar Man or Standing in the Shadows of Motown, but it's nonetheless an insightful, slick and engaging music doc for fans of hip-hop.

The film is nearly as fun as the song.

While a 90-minute movie about a song might seem ripe for thinness, Sample This is never dull. Tightly paced and packed with unbelievable twists and turns, it's a truly fun experience.

We've all danced at some time another to the rhythmic "Apache," even if we didn't know it, and this highly enjoyable doc reveals the incredibly colorful and variegated tale behind it.

Audience Reviews for Sample This

There are no featured audience reviews yet. Click the link below to see what others say about Sample This!