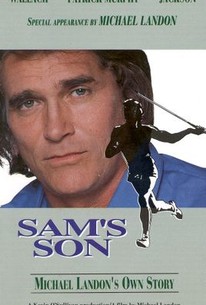 This largely autobiographical story written and directed by Michael Landon stars Timothy Patrick Murphy as Gene Orowitz (Landon's real name was Eugene Orowitz), a frail teenager with a talent for throwing the javelin and a close relationship to his father Sam (Eli Wallach), the manager of a movie theater. Sam's real love in life is writing fiction, and he pounds the keys of his typewriter well into the night as he tries to finish a major opus. One day when Gene sees Samson and Delilah (1949) at the theater where his father works, he becomes certain that whatever strength he has is due to his long hair and he refuses to cut his hair, even though long hair turns the school principal apoplectic and has to be disguised when Gene is at a sports meet. Gene's life is not a bed of roses, yet when he is dumped by his girlfriend Bonnie for Robert (Alan Hayes), an arrogant football player who has bullied him whenever the chance arose, his good friend Cathy (Hallie Todd) stays by his side. Later, he has his own revenge with Robert by connecting with a right to the jaw, shocking everyone, perhaps even himself. Gene has been working out to get ready for a big school meet and is a bit stronger in his javelin-tossing arm. As the day of the big meet approaches, life changes dramatically for him -- and the movie's climax, though it appears contrived, actually happened to Landon in real life. Landon also plays a small role in the film as a movie star visiting his hometown -- and in some ways, he was "Sam's son" because he himself took to writing -- including the script for this movie, in fact.

Randy Faustino
as Tony
View All

There are no critic reviews yet for Sam's Son. Keep checking Rotten Tomatoes for updates!

There are no featured reviews for Sam's Son at this time.