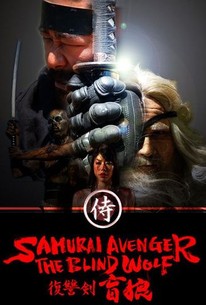 The East meets the Wild West in this frantic cult item written and directed by Kurando Mitsutake. Nathan Flesher (Domiziano Arcangeli) is a vicious outlaw who has spent the last eight years in a poorly fortified jail cell and is soon to be released. The Blind Wolf (Kurando Mitsutake) is a man with a very personal grudge against Flesher -- the outlaw killed his wife and children and left him blind before the law caught up with him. Since then, the Wolf has devoted his life to mastering the deadly art of the sword, and he's determined to take revenge against the outlaw. But Flesher is aware well aware of his deadly adversary, and has hired a band of gunmen and martial arts experts to murder the Blind Wolf before he can draw his weapon. It isn't long before a trail of blood marks the Blind Wolf's path to a meeting with Flesher and his gang. Resembling a three-way cross between classic samurai cinema, 1970's exploitation movies and El Topo, Samurai Avenger: The Blind Wolf received its North American premiere as an official selection at the 2009 Cinequest Film Festival.

There are no critic reviews yet for Samurai Avenger: The Blind Wolf. Keep checking Rotten Tomatoes for updates!

27/05/2010 (DVD) This film is trying to take a piss out of classic films like "The Good, Bad and the Ugly" and "Seven Samurai". This is a very amateur film with a bunch of dry jokes, terrible performances and a stupid dialogue. I have a feeling that was thier goal. It is uninteresting but I did like the end.