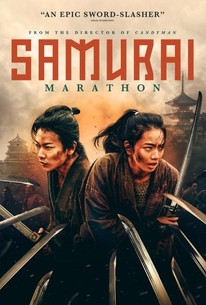 Inspired by a real-life race that is still held annually in Japan, Samurai Marathon is a lively action pic with a samurai twist. In the late feudal era of Japan, a young ninja (Satoh) is operating undercover in the court of an aging Lord during a peaceful era of Japan that is on the brink of change. After the Lord challenges his lazy samurais to a punishing marathon to toughen them up, the ninja finds his loyalties put to the test. Facing impossible odds, this unusual band of characters is running a race to win or die.

Once the pace slows down a bit...Samurai Marathon settles into an entertaining pastiche, honorably respecting its cinematic forbears.

While its true-life inspiration is an intriguing historical tidbit, this uneven Shogun saga struggles to reach the finish line.

Uneven, but it ultimately sticks its landing and ends on a very strong note.

So while the film itself is the "lively action flick with a samurai twist" experience as promised, it doesn't evoke the kind of munificence it wants to bestow upon the proceedings.

A mix of art and action that's occasionally uneven, but full of adventure and spirit.

Samurai Marathon is a fatally confused film, unsure what it wants to say or do other than exist as an excuse for Western creatives to play with the toy box of feudal Japan.

An entertaining if not slightly underwhelming look at an interesting piece of history.

A measured and intricate depiction of a timeless fight for honour and culture in ever-changing times. Well worth your time.

There are no featured reviews for Samurai Marathon at this time.