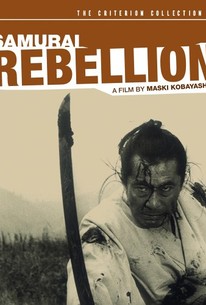 In this Japanese historical drama set in 18th-century Japan, a father involved in feudal system begins to question that system when the local rulers demand that the man's son send his wife, whom the powerful family had previously expelled, back to them after the woman bore a son, the rightful heir to the family's power. The son and his wife, who are truly in love, refuse; the father, who also loves the child, supports them. The family then orders father and son to suicide, but again, they refuse and instead launch a rebellion on the ruling family's army's. They die fighting.

No one could seethe better than Mifune, but what gives the movie equal shares of exhilaration and heartbreak is the feeling that pours out of him ...

The film's escalation of tension is almost unbearable, and Mifune erupts with a ferocity that's as righteous as it is ultimately tragic, for Kobayashi refuses to soften the film's devastating imbalance of power.

As extreme a samurai film as I've seen in both senses (the ethics and the violence), and one of the best.

A heart-felt action film that is eloquent and haunting in its reflections on the abuse of powers by the ruling class.

It is obvious that it will end in violence, but the violence is a long time coming. I kept wondering why they didn't just get on with it.

As powerful, meditative, and gripping as anything Akira Kurosawa, Kenji Mizoguchi, Yasujiro Ozu, or other Japanese masters have created.

A well-made Toshiro Mifune' vehicle about class system injustice in Feudal Japan. Slow at first, but builds to an action-packed finale'.

Oh man, don't you dare cross Toshiro Mifune. The veteran actor has amassed quite a body count during his cinematic reign in which he ruled for an astounding 170 feature-length films, and here he adds a few more notches to his blood-soaked belt. While it can be quite depressing to think of all the poor Japanese folks that Mifune has dispatched over his career, director Masaka Kobayashi goes to painstaking lengths to make sure the viewer knows that at least in this film, he is doing it for good reason. Not only is he giving the finger to the almighty creator by doing away with his creation with his unparalleled swordsmanship, but he is also rebelling against the daimyo of the Aisu clan of which he is a vassal, a crime of which there can be no forgiveness. Although not as impressive visually or thematically intriguing as his 1962 masterpiece Harakiri, Kobayashi once again proves that he is a capable storyteller. All the while examining social order and the price that it imposes on the body of people that it claims to protect. Despite the fact that the material was in the hands of Shinobu Hashimoto, the writer responsible for Harakiri, it is unfortunately lacking the urgency and vitality that made the prior film so special. Yet, not all is lost as Kobayashi delicately sheds light not on the overt violence that this society cultivated, but rather the quiet disruption of the family for the sake of the lord. Though Kobayashi's revisionist tale isn't as gripping as his previous work, it is still a very exciting piece of cinema and further proof that Kurosawa & Ozu aren't the only Japanese directors worthy of our respect.

Toshiro Mifune is at it again with this Sensational, deeply moving samurai flick thats worth WATCHING!!! AGAIN AND AGAIN!!! The 18th century was a great time in these era of films still the 16th century always has me. I liked the acting and story and costumes and ECT.

the end was a little upsetting, but the rebel in me was excited for this one. overall a great flick, and even the disappointing end has a redeeming moment.