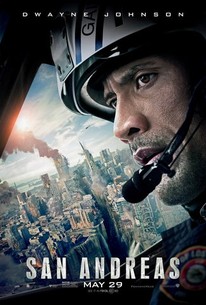 Critics Consensus: San Andreas has a great cast and outstanding special effects, but amidst all the senses-shattering destruction, the movie's characters and plot prove less than structurally sound.

Critics Consensus: San Andreas has a great cast and outstanding special effects, but amidst all the senses-shattering destruction, the movie's characters and plot prove less than structurally sound.

Critic Consensus: San Andreas has a great cast and outstanding special effects, but amidst all the senses-shattering destruction, the movie's characters and plot prove less than structurally sound.

Will Yun Lee
as Kim

This adrenaline-pumping movie turns a nightmare into big screen reality as it takes the disaster film genre to a whole new level.

All the moving parts are expertly juggled by director Brad Peyton and, yes, the special effects are impressive. But the disaster stuff is laid on way too thick.

It's enormously entertaining, thanks to the undeniable charisma of Dwayne "The Rock" Johnson and the wanton CGI destruction of all of the West Coast's greatest landmarks (in 3-D, no less).

Summer's upon us, and you could do worse than watch the undeniably appealing Johnson try to save the day while uttering the silliest dialogue imaginable.

San Andreas is nowhere near the best movie made this year. Indeed, it might be one of the worst. But it is, without a doubt, one of the most unapologetic, self-aware, and entertaining romps of 2015. And that counts for something.

This movie didn't take much time escalating from realistic depiction of a disaster to giant, numbing CGI spectacle.

One can't exactly hate a film that delivers all the empty sound-and-fury stimuli it promises, but no matter the expense and excess, it still all adds up to just a glut of expensive... emptiness.

Peyton's panoramas of crumbling CGI skyscrapers are spectacular but repetitive, and the script by Carlton Cuse (Lost) is uneven and cheesy.

San Andreas plays like a greatest hits package of action movies from the past quarter-century.

I hoped the ground would open up and gobble up whole the movie. What a disaster.

There's not a lot to hold onto in San Andreas. It ticks the boxes of a disaster film, but rarely, if ever, asks the audience to do anything other than ooh and ahh at its effects.

Unfolds exactly like a Roland Emmerich disaster movie, which means the screen is awash with computer-enhanced destruction of epic proportions.

Mike Massie
Gone With The Twins
View All Critic Reviews (251)

Entertaining but overall somewhat fake-looking catastrophe movie. Somehow the film fails to entirely grasp the atmosphere of places like Hoover dam or San Francisco, the special effects often do not look like actual places. Sure, the destruction is impressive, but the story is so shallow, full of coincidences and sheer luck, it's silly. At least The Rock makes for a convincing leading man.

It's true that there's a huge disaster in front of you, on the screen -- but probably not the one Brad Peyton had in mind when he threw this schlock together. Dwayne Johnson isn't as bad as I would have expected, but that doesn't mean there's good acting to be found. (Although there is some nice eye candy in Aussie hunk HUGO JOHNSTONE-BURT.) Scenes are stolen seemingly whole-cloth from prior disaster films such as Independence Day, Volcano and 2012 -- including the lone scientist at CalTech who knows what's going on with his special laptop computer program but who must fight to get the warning out to a world that seems to ignore him for no discernible reason. The story is silly and unsophisticated. (Can you really buy that one of LA Fire Rescue's handful of rescue choppers can just disappear and go on personal errands across the state of California all day during the very time a huge disaster is hitting the state?!) The dialogue and script are beyond inane (including one preposterous scene where a televised news anchor announces that most of the electricity in the city is "out" -- as shown on a functioning TV screen in a room full of operational computers and electronic devices being used to hack into LA-based media companies via the Internet from very nearby Pasadena). The CGI effects are spectacular, but that's the only good thing about "San Andreas". The biggest fault here ain't deep in the ground -- it's on the screen in front of you.