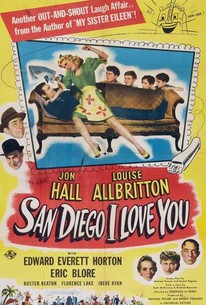 San Diego, I Love You Photos

Louise Allbritton, a talented but neglected film star of the 1940s, plays the oldest sister in a large motherless family. Papa (Edward Everett Horton) is an erstwhile inventor working on a collapsible life raft, which Allbritton tries to promote to a handsome financier (Jon Hall) who mistrusts women. It isn't hard to guess who will fall in love with who in this one, but the true appeal of this film lies in the performance of Louise Allbritton, who directly and indirectly encourages all with whom she comes in contact to break the shackles of tradition and normality and to follow the dictates of the Heart. The most famous sequence in San Diego I Love You concerns cynical bus driver Buster Keaton, who thanks to Allbritton's influence decides to break loose from his tiresome routine and takes his delighted passengers on an impromptu bus trip to the moonlit seashore. At the end of this enchanting vignette, Buster Keaton the actor drops his own deadpan "tradition" and breaks out in a warm smile!

William B. Davidson
as General

Matt McHugh
as Man on street

Gene Roth
as Stevedore
View All

Critic Reviews for San Diego, I Love You

Louise Allbritton demonstrates in this movie that she is not just a beautiful woman. [Full review in Spanish]

There are no featured reviews for San Diego, I Love You at this time.

San Diego, I Love You Quotes