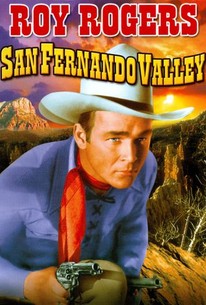 Roy Rogers and Dale Evans still weren't man and wife when they costarred in Republic's San Fernando Valley. As always, Rogers is cast as a cowboy who happens to be named Roy Rogers; Evans, on the other hand, plays feisty femme ranchowner Dale Kenyon. At the behest of Dale's grandfather (Andrew Tombes), Roy does the "Taming of the Shrew" bit, taking a job as ranch cook so he can woo and win the volatile Miss Kenyon. He also takes time out to capture a couple of bank robbers who'd earlier relieved him of his life savings. Many of the film's best scenes belong to hoydenish Jean Porter, cast as Dale's bratty kid sister: Ms. Porter would later retire from films to marry director Edward Dmytryk.

Bob Nolan
as Bob
View All

There are no critic reviews yet for San Fernando Valley. Keep checking Rotten Tomatoes for updates!

There are no featured reviews for San Fernando Valley at this time.