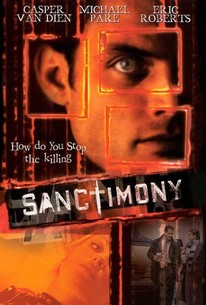 Eric Roberts is at it again in this serial killer thriller from Uwe Boll, a director best known for his 1991 film German Fried Movie. In an anonymous American town (actually Vancouver) a serial nutcase is taking the proverb "See no evil, hear no evil, speak no evil," a little too seriously, robbing victims of their eyes, ears, and tongues. Detectives Jim Renart (Michael Pare) and Dorothy Smith (Jennifer Rubin) are under pressure from their superior (Roberts) to capture the killer, and they finally get a break when alpha-yuppie stockbroker Tom Gerrick (Casper Van Dien) offers himself for questioning. However, actually nailing Gerrick proves to be a difficult matter, especially with the feds set to take over the case in mere hours, and Gerrick's impending appearance on a TV talkshow.

Adam Harrington
as Hank
View All

It's universally accepted that Uwe Boll just cannot direct a decent film, but that doesn't mean they fail to entertain, this one was just dysmal though. A serial-killer movie with little killing, no suspense and a miscast villain. Boring and uninteresting.