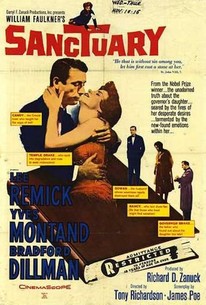 Combining elements from William Faulkner's novel Sanctuary, its sequel Requiem for a Nun, and a stage adaptation of Requiem for a Nun by Ruth Ford, director Tony Richardson's film is set in 1920s Mississippi and recounts the story of Temple Drake (Lee Remick), a young, lustful white woman who falls for a man who rapes her, only to marry another when she is told that her lover has died. The story is told as a flashback in an attempt to explain what led to the film's present, in which a black maid is on trial for the murder of Temple's baby. This was Richardson's first film made for a studio; he agreed to make Sanctuary to fund his next film, A Taste of Honey. ~ Matthew Tobey, Rovi

Voltaire Perkins
as the Judge

Wilton Felder
as Musician
View All

It is poker-faced and chilly and ridiculous. when it should have been rich and gory and circuitous and steamy and (perhaps) tragic.

There are no featured reviews for Sanctuary at this time.