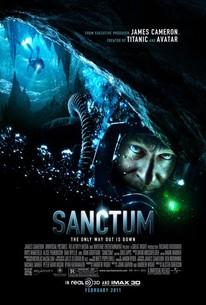 Critics Consensus: Sanctum is beautifully photographed, and it makes better use of 3-D technology than most, but that doesn't make up for its ham-handed script and lifeless cast.

Critics Consensus: Sanctum is beautifully photographed, and it makes better use of 3-D technology than most, but that doesn't make up for its ham-handed script and lifeless cast.

Critic Consensus: Sanctum is beautifully photographed, and it makes better use of 3-D technology than most, but that doesn't make up for its ham-handed script and lifeless cast.

The 3-D action-thriller Sanctum, from executive producer James Cameron, follows a team of underwater cave divers on a treacherous expedition to the largest, most beautiful and least accessible cave system on Earth. When a tropical storm forces them deep into the caverns, they must fight raging water, deadly terrain and creeping panic as they search for an unknown escape route to the sea. Master diver Frank McGuire (Richard Roxburgh) has explored the South Pacific's Esa-ala Caves for months. But when his exit is cut off in a flash flood, Frank's team--including 17-year-old son Josh (Rhys Wakefield) and financier Carl Hurley (Ioan Gruffudd)--are forced to radically alter plans. With dwindling supplies, the crew must navigate an underwater labyrinth to make it out. Soon, they are confronted with the unavoidable question: Can they survive, or will they be trapped forever? Shot on location off the Gold Coast in Queensland, Australia, Sanctum employs 3-D photography techniques Cameron developed to lens Avatar. Designed to operate in extreme environments, the technology used to shoot the action-thriller will bring audiences on a breathless journey across plunging cliffs and into the furthest reaches of our subterranean world. -- (C) Universal

Its downfall is its cliché-riddled and fusty script.

Despite the millions clearly poured into it, the film feels cheap and amateurish. See it on IMAX if you wish, but the flaws will only look bigger.

It's ruthless, claustrophobic and rather less fun than the 1959 version of Journey to the Centre of the Earth.

Sometimes the sets look like, well, Styrofoam. So do the actors.

Stick that camera down an aquatic cave, wrap a paper-thin plot around it, slap the whole thing up on an IMAX screen and call it a movie. More truth in advertising: Call it a lame movie.

After a sluggish half hour, this well-crafted adventure kicks into high gear and never lets up.

An interesting journey thanks to a decent helping of suspenseful moments, but it's unfortunate the characters don't retain the same level of intrigue.

The cast is uniformly weak, likely a combination of being forced to mutter words that shouldn't even be thought in silence and their own cinematic inadequacy.

The characters are so head-scratchingly idiotic you wonder how in the world they managed to put their swimsuits on.

At the high moments, it is an edge of your seat kind of thriller where the tension constantly creeps upwards, and the characters are in real, immediate danger. Only those moments are far too few and far between.

Sanctum has on its plus side stunning settings and excellent use of the 3D process [but] that dimensionality doesn't go very far with the characters.

An enjoyable if formulaic film.

Mediocre action film, Sanctum is a film that had potential of being a great film; unfortunately it falls flat, and relies more on clichés than anything. The film is a well made, and there some exciting bits here and there, unfortunately, the material presented here is something we've seen many times before. Sanctum is the perfect example of a film that's style over substance, it looks great, but the plot is paper thin, and relies on recycled ideas from previous films in order to create an engaging film. Unfortunately the results here lack, and despite a few good moments, it doesn't do anything to really grab your attention. The end result leaves you wanting more, and considering it was produced by James Cameron, you'd expect a great film viewing experience. Unfortunately, the ideas here are overdone, and not that interesting. The high point of the film however, is that the film looks great, and it's well shot, but overall it's an empty vessel, a film that lacks effective execution to make a truly exciting thrill ride from start to finish. Sanctum is just a collection of clichés, and underwhelming performances. If you're going into this one expecting a great movie, you'll sadly be disappointed. Sanctum had potential, but the filmmakers squander that to rethread old formulaic ideas that just are not interesting. Overall, I was let down by the film, and I can't recommend it because it's just a pointless effort that lacks anything that will truly grab your attention. Watch something else, Sanctum just doesn't deliver and it is a film that should have used plenty of script rewrites before getting the go ahead. In terms of action, adventure films, this one is forgettable, and there are better ones out there.

A decent survival thriller. Watched it on DVD so don't know how good it is in 3D. The cave looks amazing and steals the show really, otherwise it ends up follow a already well trodden path for this type of film and others little new. I have to say as well why oh why make the English actor do an awful American accent, why not make his character English and save embarrassment!

Not a bad movie, but not great either. I bet it must have been pretty cool in 3D with all the suspended in water dive scenes. Without the 3D aspect, just another cave dive movie with a high body count.

I watched this film mainly because I liked the Descent and thought that this movie would be something like that. The whole plot is shallow as hell. There could have been some sort of depth between the characters like Josh and Frank and maybe that guy and his girlfriend. The characters were all two dimensional. The writing was probably the worst part of the film. It makes the characters do stupid things. I've seen a lot of movies with stupid characters, and these characters are really, really dumb. The girl for example refused to wear a wetsuit when going diving because she's an idiot and doesn't know the definition of hypothermia. All the characters as a whole were dumb when they decided to continue their little expedition when they knew a huge storm was coming and could possibly flood the caves thereby killing everyone. Why are they so stupid? It's like one irrational decision after another. The characters can't think for themselves. *SPOILERS* Ohhh and what was up with everyone drowning each other? The one foreign guy breaks every bone in his body (or so they assume) so they drown the dude! The movie makes it seem like drowning is such a peaceful way to go. It's really not. I mean not that I would know, but I read somewhere that drowning is actually really painful. It doesn't seem peaceful at all, but the movie portrays it as a soothing and calm way to go. Then when the dad gets stabbed in the back, he makes his son drown him to end his suffering...whaaaaaaaat?! That seems so traumatic for a son to kill his own father. What the hell is this? If I was stabbed in the back, I'd much rather bleed to death than to be forcefully held under water by a family member. What is with all the mindless euthanasia in this film? Was there meaning behind it or was it just poor writing? I also liked how like an hour after the boy, Josh, kills his father, he makes it to the outside world and survives. I wonder if he hadn't killed his father, if Josh could've gotten help and gone back to save him. Hmmm....I guess we'll never know. Stupid people. The other problem I had with the writing was the fact that everything in the beginning seemed so incredibly happy and fun. The entire atmosphere was just filled with joy. It was so fake and forced. When everything starts out so happy, the audience knows it can only get worse and it does. The movie is not at all predictable, but the way things happen just seem forced. It doesn't flow together as nicely as it could have. The movie just wasn't executed as well as it should've. Some of the scenes in the movie showing the huge underwater caves were really, really fake. I was surprised that it looked so terrible. I could tell exactly where the green screen started and ended. It was pretty pathetic. Don't get me wrong, I mean some parts with the water falls and cave tunnels and crap were really pretty and all, but the inconsistency annoyed me. In one scene, you'd see a beautiful underwater cave feature and in the next you'd see a huge almost clay-animated bunch of rock formations in a cave that looked really, really fake. It was rather weird to be honest. The acting part of the film was just okay. Considering all the actors were given such flat characters to portray on screen, they did a pretty good job. It's hard to play a character that literally has zero personality traits. The writing and dialogue were the main issue in this movie that made it fail. If the writer had added a little depth, a bit of an understory and given the actors the chance to play realistic people then I think this movie would've been a lot better. I didn't absolutely hate it, but it was a little boring to watch. When all the characters are obnoxious as fuck and as dumb as dirt...I can't really enjoy the film. It was just okay.