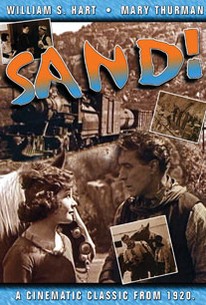 Veteran star William S. Hart both produced and starred in this western about a railroad-station agent who loses his job because of a villain's machinations. The villain (G. Raymond Nye) is a major stockholder in the railroad company and covets Hart's girl (Mary Thurman). Working as a ranch hand, Hart discovers that his enemy is actually the leader of a gang of train robbers. According to its publicity, Sand was President Woodrow Wilson's favorite Hart western.

There are no critic reviews yet for Sand!. Keep checking Rotten Tomatoes for updates!

There are no featured reviews for Sand! at this time.