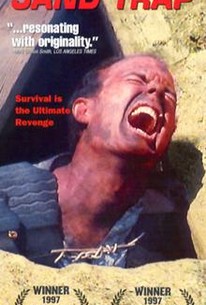 In this erotic thriller, Nelson (David John James) is in the arms of his sexy wife Margo (Elizabeth Morehead) when he's frightened by a masked man. His lawyer Jack (Brad Koepenick) invites Nelson and Margo to join him in checking a land-development deal in the desert. It's a set-up. After Jack pushes Nelson over a cliff, he and Margo make love. The couple leads local sheriff (Bob Thompson) to the scene of the "accident," but there's no body in sight. The suspicious sheriff begins looking for the body -- and so do Jack and Margo. Meanwhile, in the desert, Nelson converts a 1953 Pontiac into a crude warrior outfit (complete with hood ornament) and prepares to take on all comers. Shown at the 1997 Hollywood Film Festival.

Steve Brownyard
as Zeke
View All

There are no critic reviews yet for Sand Trap. Keep checking Rotten Tomatoes for updates!

There are no featured reviews for Sand Trap at this time.