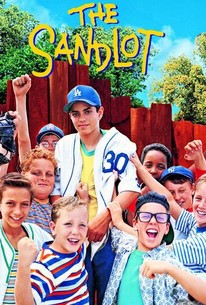 Critics Consensus: It may be shamelessly derivative and overly nostalgic, but The Sandlot is nevertheless a genuinely sweet and funny coming-of-age adventure.

Critics Consensus: It may be shamelessly derivative and overly nostalgic, but The Sandlot is nevertheless a genuinely sweet and funny coming-of-age adventure.

Critic Consensus: It may be shamelessly derivative and overly nostalgic, but The Sandlot is nevertheless a genuinely sweet and funny coming-of-age adventure.

The Sandlot is a coming-of-age story about a group of young boys growing up in California in 1962. A new, shy boy (Thomas Guiry) moves into the neighborhood, where he is initially rejected by the local boys because he doesn't know how to play baseball. Soon, he learns the sport and joins the group of boys who play ball in a local sandlot, and with his new friends, he has a variety of adventures.

Art LaFleur
as `The Babe'

Cynthia Windham
as Mother at Pool

News & Interviews for The Sandlot

View All The Sandlot News

Critic Reviews for The Sandlot

That's what The Sandlot repeatedly does: Confound your expectations. It's a charming and hilarious flick for kids (boys in particular will eat it up) that feels remarkably fresh, even during its occasional foray into cliché land.

Those in the mood to return to the age of innocence might want to try The Sandlot.

A scruffy underdog yarn that will appeal not only to kids but also to their thirty- or fortysomething parents.

In The Sandlot's nostalgia for simpler times, a single-sex world seems to be a key component.

The kids even have their own treehouse, which means that the production designer is the only person connected with this project who actually went out on a limb.

A solid double rather than a grand slam, The Sandlot remains a refreshing antidote to the daily round of contract squabbles on the sports page.

Here's another '90s movie that was beloved by boys ... yet it probably won't hold the same charge for viewers not privy to that nostalgic vibe.

The Sandlot is a classic because so much of the film focuses on time spent off the field. It's not a movie about baseball players, it's a movie about kids who happen to play baseball.

The Sandlot isn't just a baseball movie, it's a bright, uncynical look back at the joys of childhood.

After a "Porky's"-style segment dealing with puppy lust, the film then segues to its better second half.

Audience Reviews for The Sandlot

This film tells the story of how a Major League hero grew up with his friends in his old town, enjoying life and going through challenges, but ultimately sticking to his heart, which is devoted to baseball. However, the story does not specifically follow him (Benny), but the newcomer (Smalls) who has no background knowledge of baseball, but loves to play the game. With great direction, solid writing, and a fun premise, "The Sandlot" is a home run for all families. I had a blast watching this film. Even though it gets kind of laughable with Hercules the Dog, It's a great kids film!

Alongside "The Lion King" and "Toy Story", this is a film I grew up watching... many times. The plot is hilarious and there are many iconic scenes. Love all the characters.

Nothing much happens for the first half of the movie. The boys' personalities aren't distinct enough like the Little Rascals, so I lost interest. Like my experience with Groucho Marx, the "You're killing me, Smalls!" line isn't how I expected from years of others' impressions.