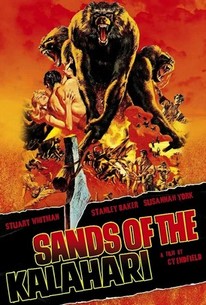 Sands of the Kalahari Photos

Stranded in the African wilds by a plane crash, a disparate group of passengers' worst enemy isn't weather or wild animals but a fellow traveler. A delayed flight causes several South African travelers to charter a small plane from unctuous pilot Sturdevan (Nigel Davenport). Among the group: Dr. Bondrachai (Theodore Bikel), divorcee Grace Munkton (Susannah York), the crooked Brian O'Brien (Stuart Whitman), the elderly German Grimmelman (Harry Andrews), and mining engineer Mike Bain (Stanley Baker). O'Brien bribes Sturdevan to reroute the flight, so when the plane is brought down in the vast Kalahari by an encounter with a cloud of locusts, no rescue can be expected. A struggle for control begins. After Studevan attacks Grace sexually, he is exiled, and Brian takes over. He attempts to banish Bondrachai and Grimmelman, but the latter objects, and Brian kills him. Only Grace and Mike are left to deal with Brian, but when they think they've got the best of him, he manages to stay alive and stalk them to plot his revenge. Vicious local baboons have a surprise for the increasingly deranged Brian, however-they are hunting the hunter. The film re-teams star/co-producer Baker with his Zulu (1964) writer/director Cy Endfield. ~ Karl Williams, Rovi

Barry Lowe
as Detjens
View All

Critic Reviews for Sands of the Kalahari

Cy Endfield explored similar themes in "Zulu" a year before but this comes off as pulp melodrama of the machismo variety.

Audience Reviews for Sands of the Kalahari

Starts well but becomes endless and then limps along to a pointless conclusion. Whitman, clad for most of the film in nothing but tiny cutoffs, is impressively fit.

Sands of the Kalahari Quotes