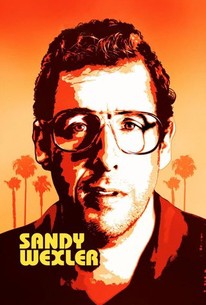 Critics Consensus: Sandy Wexler marks a mild improvement from the Adam Sandler vehicles immediately preceding it -- which in no way serves as an endorsement for non-hardcore fans.

Critics Consensus: Sandy Wexler marks a mild improvement from the Adam Sandler vehicles immediately preceding it -- which in no way serves as an endorsement for non-hardcore fans.

Critic Consensus: Sandy Wexler marks a mild improvement from the Adam Sandler vehicles immediately preceding it -- which in no way serves as an endorsement for non-hardcore fans.

There's no way to recommend it, yet I wouldn't ask for my two hours back (though I do wish that they could have been sped up somewhat).

Though Sandy Wexler comes from a place of genuine affection, it feels oddly cruel. As depicted, Sandy isn't just oblivious, but borderline incompetent.

This is all still Sandler shtick, replete with endless running gags, but it's also surprisingly endearing and often quite funny.

Adam Sandler's third Netflix comedy arrives as something of a mission statement, finding a loose moral justification for all of his bad movies.

As with almost every Sandler vehicle, this is an adoring ode to a lifelong man-baby who mistakes his half-assed excretions for art.

Sandy Wexler is a bad movie, yes, but it's not at the level of bad that made me actively hate it like I did with Sandler's last two films. It's a step up for Sandler, but that's only because he's fallen so low.

The celebrity cameos range from the expected to the embarrassing to the downright baffling...

Some of the things I dug most were the weird, playful touches that Sandler plays down here -- for example, his character's bedtime ritual of apologizing to clothes he hasn't worn in a while. Brilliant.

Adam Sandler's third movie with Netflix is the very definition of over indulgence.

Sandy Wexler isn't perfect, but it's the best movie Sandler has made since Zoran. It's sweet, funny and it has charisma, something long gone in Adam Sandler's filmography. I'm standing up for Sandy Wexler, and I hope future Adam's films could have more of the charm, heart and comedy. Sandy Wexler is the prove that this could happen. This one gave me hope. Fresh.

I liked it compared to all the other Sandler vehicles but it is surprisingly long and recycles tired jokes. I had a great laugh with the Racoon and baseball bat scene but that's a highlight far between others. Sandler is a funny person but the characters are tired and often recreations of other ones. I wanted to see some originality here but the film doesn't produce much, a laugh here and there doesn't do the film any favours. This might possibly be the last Netflix Sandler movie I watch.